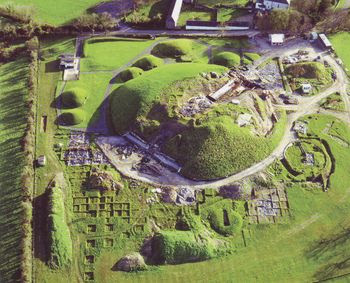 1 November 527 AD: After Muircheartach [Muirchertach Mac Erca] … had been twenty four years in the sovereignty of Ireland, he was burned in the house of Cleiteach, over the Boyne, on the night of Samhain [the first of November] after being drowned in wine.


Annals of the Four Masters

Muirchertach Mac Erca was one of the greatest of the early Irish Kings. His first great victory was at the Battle of Ocha in County Meath in circa 483 AD. There he helped defeat and kill Ailill Molt, the King of Connacht. Muirchertach was the great grandson of Niall of the Nine Hostages and from the Northern Uí Néill branch of that family. Initially he ruled most of the North from his royal site at Ailech (near Derry). But after the death of King Lugaid of Tara from the Southern Uí Néill (and the joint victor of Ocha) Muirchertach succeeded him to the title of ‘King of Tara’ and moved his power base south. He was clearly a king of some military ability and after Ocha he was victorious in 11 further battles over his enemies in the course of a long career.

King Muirchertach came to a bizarre end, being drowned in a vat of wine. This strange event took place somewhere about the location of those ancient Neolithic passage tombs, Knowth, Dowth and Newgrange. It would appear that this was a planned royal assassination in which the King’s body was to be left unblemished but his soul sent to eternity. Possibly his death was due to an internal family rivalry due to him taking a much younger mistress - a woman by the name of Sín!


Sín is the woman that killed thee,


Numerous will her names be here—


She will set one astray.