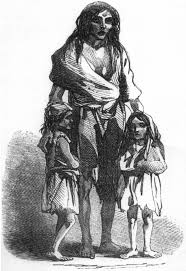 The Great Irish Famine/An Gorta Mor swept across the land of Ireland. The direct cause of the calamity that the Country experienced in those times was the failure of the Potato crop, whose tubers were left rotten by a blight. However an Act of Nature was compounded by acts of folly and nay indifference by those acting on behalf of the British Administration here.


By November 1846 it was clear that the poorest of the people faced another Winter of complete hardship as the blight returned to haunt the land. The effects of prolonged malnutrition on weakened bodies proved too much for many of those so afflicted by the want of necessities to sustain human life. The deaths of two such unfortunates was reported in the Cork Examiner on this day.


IN the letter of an "Out-Door Pauper" from Macroom, will be found the recital of the death at Sleaven, from famine, of a poor woman, returning from the Workhouse, where she and her children had received their daily meal. The Tallow Relief Committee, in a resolution just forwarded to the Lord LIEUTENANT and which we give elsewhere, announce the death of another man, named KEEFFE, of Kilbeg, who also perished for want of food.


We know not what to say. We have already expressed, with the most indignant vehemence, our horror of the negligence which permitted our fellow beings to perish in the midst of us. We leave these last instances to speak for themselves-- for murder speaks with a most miraculous organ-- and these are scarcely less than a murder. We trust in GOD we shall be shocked no more by such recitals. There is a promise of general employment, at last; and to this we turn from the prolonged horror of Irish suffering and despair.