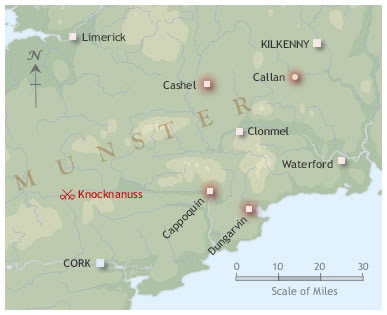 13 November 1647: The Battle of Knocknanuss in Co Cork was fought on this day. The opposing armies were those of the Irish Protestant, Murrough O’Brien (the later Lord Inchiquin), who was commited to support the English Parliament and those of the English Catholic, Viscount Theobald Taafe, leading a Confederate Army loyal to the Supreme Council of Kilkenny. Viscount Taafe was given the task by the Council of raiding into the lands under the control of Inchiquin’s troops. This was in retaliation for the attacks launched by the Parliamentry forces on Cashel and Callan in the previous months and the numerous atrocities they had carried out. The Catholic commander was able to assemble a force of about 6,000 infantry and some 1,200 cavalry. Amongst this force was a contingent of Scottish ‘Redshanks’ mercenaries under the legendry warrior leader Alasdair MacColla (Alistair McDonnell). However Viscount Taafe owed his appointment to political intrigue rather than any natural military abilities. It appears his heart was not really in the enterprise anyway and his conduct of the campaign reflected poorly on him.

His initial dispositions on the day of the battle were good in that he held the high ground but he fatally deployed his army in two separate wings divided by a hill that essentially cut one off from the other. Despite having a slight numerical advantage he did not utilise his force in a co ordinated manner but allowed each local commander to decide his own course of action. Alasdair MacColla’s men were the first into battle as they charged down upon the enemys’ flank opposite their own, broke their lines and routed them. Thinking the battle won they then fell to plundering Inchiquin’s Baggage Train and took no further meaningful part in the affair.


Murrough O’Brien however kept his cool throughout all of this. Sensing the moment was ripe he launched his own troopers uphill at the charge upon the Confederates left flank and put their cavalry to flight. The Munster infantrymen situated towards the centre of the line gave one ragged volley and then promptly fell back. The whole Confederate line then began to buckle and retreat developed into Rout. The Parliamentry Cavalry pursued their opponents for miles putting many to the sword as they did so. Meanwhile Alasdair MacColla and what remained of his men were surrounded and captured before being put to death on the spot. The defeat at Knocknanuss was a mortal blow for the Confederacy in the Province of Munster and was a defeat from which they never recovered.