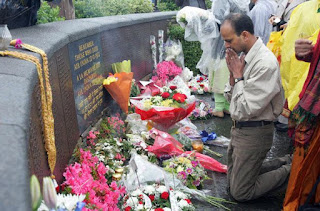 23 June 1985: The destruction of Air India flight 182 on this day. The plane was flying from Toronto, Canada to Delhi, India via London, England. It was some 120 miles off the south west coast of Ireland at an altitude of 31,000 feet when at 8.13am the plane disappeared off the radar screen of Air Traffic Control at Shannon airport. It had exploded - killing all on board - 329 lives were lost, including 268 Canadian citizens, 27 Britons, and 24 Indians. 80 were children.

The majority of the victims were Canadian citizens of Indian ancestry. The bombing of Air India 182 occurred at the same time as the Narita airport [Japan] bombing. Investigators believe that the two plots were linked, and that the group responsible was aiming for a double bombing. However, the bomb at Narita exploded before it could be loaded onto the plane.

Canadian law enforcement determined that the main suspects in the bombing were members of the Sikh group Babbar Khalsa. The attack is thought to have been a retaliation against India for the operation carried out by the Indian Army Operation Blue Star to flush out several hundred Sikh Militants who were within the premises of the Golden Temple and the surrounding structures. The operation was ordered by the Prime Minister Indira Ghandi. Though a handful of members were arrested and tried, Inderjit Singh Reyat, a Canadian national, remains the only person legally convicted of involvement in the bombing. Singh pleaded guilty in 2003 to manslaughter. He was sentenced to 15 years in prison for building the bombs that exploded aboard Flight 182 and at Narita.

The subsequent investigation and prosecution lasted almost twenty years and was the most expensive trial in Canadian history, costing nearly130 million Canadian dollars.

131 bodies were subsequently recovered from the sea. It was one of the biggest operations in the history of the State to recover their remains which was undertaken by the Irish Navy. The L.É. AISLING navy ship, under the command of Lieutenant Commander James Robinson, was one of the first vessels on scene. The RAF and the Royal Navy also helped to recover the bodies and debris from the site which extended over a large area of the sea.

Every year, a remembrance ceremony is held in Cork at the memorial garden and sundial in Ahakista in County Cork [above]