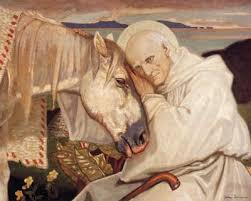 9 June 597 AD: The Death of Saint Columba (aka 'Colmcille' - Dove of the Church) on the island of Iona off the west coast of Scotland.

Columba was the son of Fedlimid and Eithne of the Cenél Conaill. He was probably born in Gartan, near Lough Gartan, in what is now County Donegal. The earliest surviving evidence – that from his Vita/Life by Adomnán, written about a century after his death – tells us simply that:

‘the holy Columba was born of noble parents having as his father Fedelmid, Fergus’s son, and his mother, Eithne by name, whose father may be called in Latin "son of a ship''

When sufficiently advanced in letters he entered the monastery of Moville under St. Finnian, then at Clonard, governed at that time by Finnian. Another preceptor of Columba was St. Mobhi, whose monastery was at Glasnevin near Dubhlinn [Dublin]. The pestilence that devastated Ireland in 544 AD caused the dispersion of Mobhi's disciples and Columba returned to the North. However his following years were marked by the foundation of several important monasteries at Kells in the north midlands and at Derry in the North. After political troubles at home for which he was found at fault Columba left Ireland and passed over to the island of Iona in 563 AD. Conall, king of Dál Riata gave him the island to use as his base and there he founded his famous Monastery.

The people of Scottish Dál Riata shared a language, culture and political life with the Dál Riata of Ireland, and with Ireland as a whole. It is virtually certain that they also shared the Christian faith. Colum Cille came, therefore, to a Scottish Dál Riata which had already accepted Christianity. We can assume that he came to a landscape already dotted with churches, where priests and even an occasional bishop already ministered to their people.

What Colum Cille brought to Scottish Dál Riata was not Christianity, therefore, but a monastic community of brothers who would live and work and pray together. It is in this light above all that Adomnán seeks to portray him: as the father of monks, founding, teaching and guiding a community. He also portrays him as a man of power – not the secular power of kings and warlords, which Colum Cille had abandoned in Ireland, but the power of the ascetic, the contemplative. He exercises the divine power that is given to those who have rejected wordly power.

After spending some years among the Scots of Dál Riata, who were related to the Gaels of north east Ulster, Columba began the great work of his life, the conversion of the Northern Picts. After this the remaining years of Columba's life were mainly spent in preaching the Christian Faith to the inhabitants of the glens and wooded areas of northern Scotland. Of course 'Scotland' as such did not exist then as a separate country and indeed the word Scotland comes from the Roman word for the Gaels of Ireland - Scotii.

Saint Columba was famous for his prophecies and on Iona he lived the life of an ascetic while also engaged in the business of the Church in Scotland. Adomnán portrays Colum Cille as actively engaged with the kings of Dál Riata in western Scotland– not only obtaining land from them and blessing particular candidates for kingship, but even inaugurating Áedán mac Gabráin as king in the monastery of Iona.

He also kept in contact with Ireland too and he returned home on occasion even though he was formally exiled. Adomnán says he went back to Ireland when he founded the monastery of Dair Mag (Durrow) between 585 and 597. He also got involved in the politics of the North once again . He returned to Ireland for a conference of kings at which were present Áed mac Ainmirech, king of the northern Uí Néill and eventually king of Tara, and Áedán mac Gabráin, king of Dál Riata. Legend has it that having been told never to put his feet on the soil of Ireland again and agreeing to that he returned wearing shoes of sods of turf in order to keep his promise! Adomnán describes Colmcille as using two separate buildings during his daily life - a writing hut and a hut where he slept and ‘where at night instead of straw he had bare rock and stone for a pillow’.

He is also credited with the initiation of a continuous record of Irish History as set down in the Annals- the Iona Chronicle - whose successor scribes recorded the History of Ireland on a year by year basis down to the 17th Century. His 'Life' - Vita Columbae was written by his distant successor the 9th Abbot of Iona, Saint Adomnán. Columba is said never to have spent an hour without study, prayer, or similar occupations. He is the greatest Saint to have come out of Ireland.