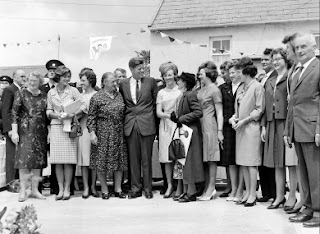 27 June 1963: The President the United States John F Kennedy visited his ancestral home at Dunganstown, Co Wexford on this day. His visit to Ireland was the first by a serving American President. His ‘Homecoming' was greeted with huge enthusiasm by nearly the whole population as the President with film star looks and charisma to burn made a deep and lasting impression on the Irish People:

While in New Ross Wexford that day he made a speech that became a classic of its kind, only a few hundred words long but delivered with great wit and style he struck a chord with his audience that was remembered long after his tragic death in Dallas Texas just a few short months later.

See, angie, how nice it is, just to be Irish?

I am glad to be here. It took 115 years to make this trip and 6,000 miles, and three generations. But I am proud to be here and I appreciate the warm welcome you have given to all of us. When my great grandfather left here to become a cooper in East Boston, he carried nothing with him except two things: a strong religious faith and a strong desire for liberty. I am glad to say that all of his great grandchildren have valued that inheritance.

If he hadn’t left, I would be working over at the Albatross Company, or perhaps for John V. Kelly. In any case, we are happy to be back here.

About 50 years ago, an Irishman from New Ross traveled down to Washington with his family, and in order to tell his neighbors how well he was doing, he had his picture taken in front of the White House and said, “This is our summer home. Come and see us.” Well, it is our home also in the Winter, and I hope you will come and see us.

President Kennedy’s visit to the land of his ancestors was a huge event and his prestige  amongst the Irish as ‘one of our own’ who had become President of the United States was unprecedented. Even today he has a ‘God like’ status amongst the Irish People of that generation that still echoes down the years....