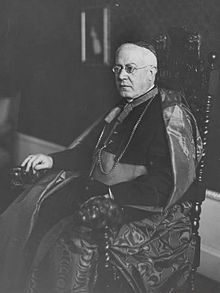 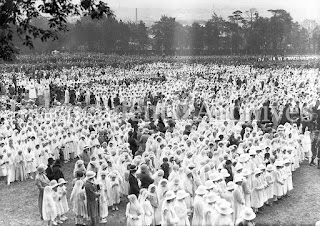 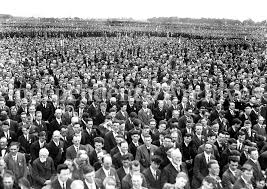 26‭ June 1932: The Eucharistic Congress culminated on this day when over one million people attended the Pontifical High Mass in the Phoenix Park, Dublin. The Chief Celebrant was the Papal Legate Cardinal Lorenzo Lauri [above], personally selected by Pope  Pius XI himself. The Holy Father had charged him to:

Go to Ireland in my name and say to the good people assembled there that the Holy Father loves Ireland and sends to Ireland and its inhabitants and visitors not the usual Apostolic blessing but a very special all embracing one.

As his ship arrived in Dún Laoghaire on Monday 20 June, it was escorted into the harbour by aeroplanes flying in formation in the shape of a cross. He travelled in procession the nine miles from Dun Laoghaire to St Mary's Pro-Cathedral in Dublin in the Lord Mayor’s Coach, led by the Blue Hussars, a recently created ceremonial cavalry unit. Made a Freeman of Dublin at a ceremony at Mansion House, during his week long stay, the Legate visited a number of towns including Armagh, Drogheda, and Dundalk.

I shall never forget the unforgettably glorious days of this Eucharistic Congress . . . all have participated, all have co-operated to make this congress a triumph, government and civic leaders, as well as ecclesiastical authorities, priests, members of religious communities, men, women and children, have all united to make this Eucharistic Congress a plebiscite of love for the Blessed Eucharist, a plebiscite of devotion to the vicar of Christ."

The arrival of the Cardinal and the holding of the‭ 19th Eucharistic Congress in Dublin was seen as a great honour for the Catholics of Ireland. The week long event saw huge displays of religious devotion with crowds of tens of thousands in attendance at various events. The high point of the Eucharistic Congress came on the final Sunday of the week’s festivities in the form of a massive open air mass in the Phoenix Park. An ornate High Altar flanked with choirs and bands from all over the Catholic world was the main focus of attention. The Cardinal was accompanied by the highest ranks of the Irish Catholic Hierarchy in his fulfilment of his celebration of the Mass. In addition thousands of the Clergy were there to witness and partake in the biggest religious gathering the Country had ever seen.

‭“‬It is 12.30. The Bishops are assembling, their purple shining through the green of the trees. They march in hundreds, slowly, pensively, the Bishops of the world, in white and black and red, in cream and gold and brown. They file through the three thousand priests like a coloured thread being drawn through white silk. Then up the crimson carpet, turning right and left to the colonnades of the altar, and there they sit and seen from afar through the white pillars, each group looking like Leonardo da Vinci’s painting of the Last Supper.”

The Government of Mr Eamon De Valera and the leading members of the Opposition were in attendance as well as numerous dignitaries from home and abroad.‭ ‬The huge multitude heard Mass broadcast over an extensive PA system, the largest in the world at that time. The event was listened to across the Nation and internationally through the medium of Radio Athlone. Count John McCormack gave a brilliant rendition of the Panis Angelicus (Bread of the Angels) to the multitude that grew praise from many quarters.

The audition was marvellous,‭ whether it was of the full tones of the Cardinal Legate as he spoke the Mass, the tuneful antiphon of the choir, the sharp clamour of the trumpets as they paid homage at the elevation of the Host, or the beautiful voice of John Mc Cormack that came clear and bell like, borne without a tremor over the whole silent space, midway through the Service. It was at that moment of the Elevation of the Host, the supreme point in Catholic ritual, that one fully realised the common mind that swallowed up all individuality in the immense throng. Flung together in their hundreds of thousands, like the sands on the seashore, these people were merely parts of a great organism which was performing a great act of faith, with no more ego in them than the sands themselves.

Prior to the closing ceremony a special blessing by Pope Pius XI broadcasting directly from the Vatican was relayed to the huge congregation.‭ This marked the culmination of a series of events held over the previous four days, which saw scenes of unprecedented devotion by the Catholics of Ireland.  The Eucharistic Congress entered Catholic folk memory and remained the greatest public gathering in Ireland until the visit of Pope John Paul II in 1979, which also took place in the Phoenix Park.