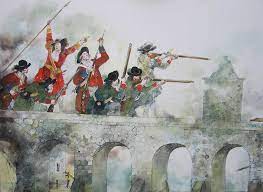 28 June 1691: At the 2nd Siege of Athlone Sgt. Custume led a small band of Volunteers that successfully tore down the attempted ‘planking’ by the Williamites of the partially destroyed bridge across the Shannon.

The siege had begun on the 19th when the Dutch General Ginkel of King William's of Orange Army had led a force of 21,000 men to the eastern side of Athlone and attacked the bastion there. The defenders were under the overall command of the French General St Ruth of King Louis XIV Army but whose troops had sworn loyalty to the Catholic King James II. St Ruth kept his main force back from the town to avoid encirclement and put a garrison of 1,500 men into to hold as long as possible.

By the 28th of June the Williamites had taken the eastern bastion and were advancing across the bridge of Athlone replacing the broken structure with lines of planks. As their men advanced the cannon and mortars of the Williamites kept up a terrific fire upon the defenders to stop them interfering with the progress of their operations.

It was Sunday, the 28th of June--the Irish saw with consternation that barely a few planks more laid on would complete the bridge. Their own few cannon were now nearly all buried in the ruined masonry, and the enemy beyond had battery on battery trained on the narrow spot--it was death to show in the line of the all but finished causeway.

Out stepped from the ranks of Maxwell's regiment, a sergeant of dragoons, Custume by name. "Are there ten men here who will die with me for Ireland?" A hundred eager voices shouted "Ay." "Then," said he, "we will save Athlone; the bridge must go down."

Grasping axes and crowbars, the devoted band rushed from behind the breastwork, and dashed forward upon the newly-laid beams. A peal of artillery, a fusillade of musketry, from the other side, and the space was swept with grapeshot and bullets. When the smoke cleared away, the bodies of the brave Custume and his ten heroes lay on the bridge, riddled with balls. They had torn away some of the beams, but every man of the eleven had perished.

Out from the ranks of the same regiment dashed as many more volunteers. "There are eleven men more who will die for Ireland." Again cross the bridge rushed the heroes. Again the spot is swept by a murderous fusillade. The smoke lifts from the scene; nine of the second band lie dead upon the bridge--two survive, but the work is done. The last beam is gone; Athlone once more is saved.

By A. M. Sullivan

Alas the brave stand of Sergeant Custume and his comrades was in vain for Lt General Ginkel, who commanded the besiegers was determined to take the town no matter what the cost. On the evening of the 30th he launched his troops 20 abreast under a German officer in the Danish service Major General Tettau into the ford at Athlone and through the waters of the Shannon. By sheer weight of numbers he got his men across while a terrific bombardment was opened up on the Irish positions. At the same time the Scottish General Mackay renewed the assault upon the bridge. Irish resistance crumbled as they were overwhelmed by superior numbers in men and material. So Athlone fell to the Williamite Army. The Irish Army barracks in Athlone is named after the brave hero of 1691.