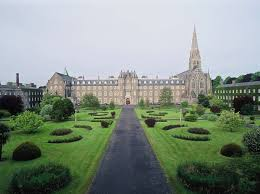 1 October 1795: St Patricks College, Maynooth/Coláiste Naoimh Phádraig, Maigh Nuad opened its doors on this day. This was a seminal moment in the history of Church-State relations in Ireland as an accommodation was reached - that would see the British Government fund the training of Catholic priests in Ireland! Before this seminarians went abroad to complete their training for the priesthood. It was hoped that such a gesture would at least mean that the Irish Catholic Hierarchy would acquiesce in upholding the Law in Ireland and discourage and condemn any violent attempt at its overthrow.

This arrangement came about as a direct result of the 1789 French Revolution which saw the overthrow of the Monarchy there and the persecution of the Catholic Religion. Many priests and prelates had to flee France and return home. The Seminaries in France and others in places conquered by the Revolutionary Armies were thus no longer available.

At home the winds of Revolution were blowing across the land - and the distinct possibility of an Insurrection weighed on the minds of the British. The Catholic Church was the strongest and most cohesive entity amongst the Catholic People. With the Penal Laws being abolished one by one the need to bring the Church within the fold was an imperative that became daily more apparent. In 1795 the British brought in the Maynooth College Act which was: An Act for the better Education of Persons professing the Popish, or Roman Catholick Religion. It provided a modest grant to establish a college.

'The Bishops began to look for a site. It was desirable that the College be near Dublin, but they found themselves not exactly welcome in several desirable locations. They settled on Maynooth because the local magnate, the Duke of Leinster, was benevolent, and his Duchess even more so. This more than compensated for the fact that Maynooth was a little more distant from the city than they would have wished. The College opened in the autumn of 1795 in a house recently built by John Stoyte, steward of the Duke.'http://maynoothcollege.ie/seminary/history/

Since then the College has trained over 11,000 priests and while also a lay college when it opened that closed in 1817. However since the 1970s more and more lay students have been taken in. Today they make up the vast majority of students in attendance and Maynooth is now one of the major centres of learning in Ireland.