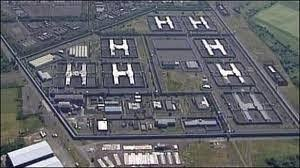 3 October 1981: The Irish Hunger Strike of 1981 ended on this day. The remaining prisoners on the strike in the H Blocks [above] of Long Kesh issued a statement which read in part:

We, the protesting Republican prisoners in the H-Blocks, being faced with the reality of sustained family intervention, are forced by this circumstance, over which we have little control at the moment, to end the hunger strike...

Our comrades have lit with their very lives an eternal beacon which will inspire this nation and people to rise and crush oppression forever and this nation can be proud that it produced such a quality of manhood...

We reaffirm our commitment to the achievement of the five demands by whatever means we believe necessary and expedient. We rule nothing out. Under no circumstances are we going to devalue the memory of our dead comrades by submitting ourselves to a dehumanising and degrading regime.

On 6 October 1981 James Prior, then Secretary of State for Northern Ireland, announced a series of measures which went a long way to meeting many aspects of the prisoners' five demands.

The hunger strike of 1981 had very important and far-reaching consequences and proved to be one of the key turning points of 'the Troubles'. The Republican movement had achieved a huge propaganda victory over the British government and had obtained a lot of international sympathy. Active and tacit support for the Irish Republican Army (IRA) increased in Nationalist areas. Political support for Sinn Féin (SF) was demonstrated in two bye-elections (and the general election in the Republic of Ireland) and eventually led to the emergence of SF as a significant political force in Irish politics across the Country.

The Republican prisoners who died on Hunger Strike that year were: