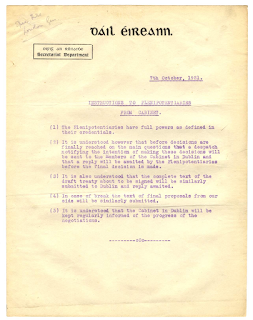 7 October 1921: Eamon de Valera, the President of Ireland issued secret instructions to the plenipotentiaries about to depart to London on this day. They were to begin negotiations with the British Government to secure a Treaty that would give recognition to Ireland’s claim to be an independent Nation.

They were as follows:

(1) The Plenipotentiaries have full powers as defined in their credentials.

(2) It is understood however that before decisions are finally reached on the main questions that a despatch notifying the intention of making these decisions will be sent to the Members of the Cabinet in Dublin and that a reply will be awaited by the Plenipotentiaries before the final decision is made.

(3) It is also understood that the complete text of the draft treaty about to be signed will be similarly submitted to Dublin and reply awaited.

(4) In case of break the text of final proposals from our side will be similarly submitted.

De Valera was concerned that the meeting of the inexperienced Irish delegates with some of the most astute and clever minds in British politics would leave the Irish wrong footed and he wanted to ensure that any deal would have his Imprimatur on it before it was signed.

And indeed when the Treaty was signed in December of that year he was not happy with the result that gave the Irish Free State the status of a British Dominion rather than all of Ireland becoming an independent Republic.