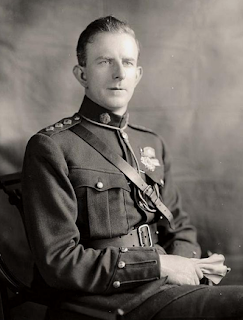 20 October 1892 - General Eoin O’Duffy was born on this day near Castleblaney Co Monaghan. He was the 2nd Commissioner of An Garda Síochána. O’Duffy first came to local prominence in the G.A.A. and afterwards as a senior figure in the IRA during the War of Independence as the leader of the Monaghan Brigade taking part in the capture of Ballytrain RIC Barracks in 1920. He was elected a TD for Monaghan in 1921 and after the Truce was sent to Belfast to organise the local defenses there against attacks by Loyalists. He supported the Treaty and was appointed a General in the Free State Army. He directed operations in the Limerick area with some success.

After the Civil War ended he was appointed Commissioner of the Garda Síochána and by all accounts did an excellent job of turning out a first rate force on a shoestring budget. However when De Valera came to power he lost favour, partially over his record in the Civil War and partly due to his obstreperous nature – especially when dealing with politicians!

He was sacked and became embroiled in party politics as a Leader the ‘Army Comrades Association’ aka ‘the Blueshirts’, a semi Fascist organisation and then he merged them with Fine Gael. His antics as a political leader lowered his esteem in the eyes of many and eventually his Blueshirt movement fizzled out and he parted company with F.G. He led a small expeditionary force to Spain to fight alongside the Fascists there but after a few minor skirmishes the group returned home and disbanded. O’Duffy died in 1944, a broken man living in lonely isolation, though for his past services De Valera granted him a State Funeral.