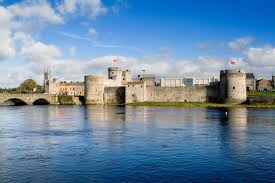 27 October 1651:  Aodh Dubh O'Neill surrendered the city of Limerick on this day. He capitulated under pressure from sections of the populace who were suffering from starvation and want. In addition some of his own troops had had enough too. The townsmen were granted quarter for their lives and property, but were warned that they could be evicted in the future. Over 2,000 English Parliamentary soldiers died at Limerick, mostly from disease. Among them was Henry Ireton, who died a month after the fall of the city. About 700 of the Irish garrison died and an unknown, but probably far greater number of civilians – usually estimated at about 5,000.

The soldiers of the garrison were disarmed and allowed to march away to Galway. Several of the leading defenders of Limerick were executed for prolonging the siege. Under the terms of surrender, O'Neill was to be executed for his stubborn defence of the city, but the Parliamentarian general Edmund Ludlow did not carry out the sentence and instead sent O'Neill into imprisonment in the Tower of London.

‭His father was Art Og O'Neill, and was among those exiles who made careers for themselves in the Spanish Army of Flanders. Aodh was, as a result, born in Brussels in 1611 and grew up  there, becoming a professional soldier and serving in the Irish regiment of the Spanish Army Of Flanders against the Revolt of the Dutch Provinces.

In 1642, his uncle Owen Roe O’Neill  organised the return of 300 Irish officers in the Spanish service to Ireland to support the Ulster Catholics regain their lands from the Scots and the English. O'Neill's men became the northern branch of the Army of Confederate Ireland which was based at the city of Kilkenny in the south of the Country. He was captured early in the fighting but was released after his Uncle’s great Victory of the Scots at Benburb in 1646. He subsequently rose to prominence after the death of his uncle, Owen Roe O'Neill, in 1649.

Later that year he was sent south with 2,000 veteran Ulster troops to defend southern Ireland. He distinguished himself at the Siege of Clonmel in May 1650, inflicting the worst casualties ever experienced by Cromwell’s Army and their only military defeat.  He was then made commander of the defenders at the Siege of Limerick fighting off the first attempt to take the city in late 1650. However, the following year, Cromwell’s son in law Henry Ireton besieged the city again, eventually forcing the city to surrender when the city's population was dying of hunger and plague, and part of his garrison threatened a Mutiny.

Aodh Dubh's imprisonment in London was cut short by the intervention of the Spanish Ambassador to England, who argued that he was a Spanish subject. He was subsequently released into Spanish custody on condition that he would not serve in campaigns against English forces ever again. He did not, therefore, return to Flanders, but was posted to Spain, where he became a General of Artillery.  He was recognized by the Spanish as the 5th Earl of Tyrone upon the death of his first cousin, Aodh Eugene.

In around 1660 he wrote to the newly restored  King of England Charles II and asked for his family's ancestral lands to be restored, and that he be made recognised as the Earl of Tyrone. However Charles did not grant the request and Aodh Dubh died of disease later that year. He deserves his place in Military History as the only man to ever defeat Oliver Cromwell in a Clash of Arms.