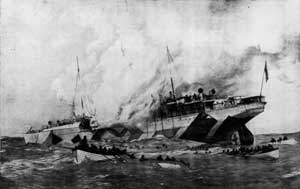 10 October 1918: The sinking of the mailboat RMS Leinster in the Irish Sea on this day. The ship was sunk by a German submarine and went down very rapidly. Over 560 men, women and children were drowned. It was the greatest loss of life suffered by an Irish owned vessel in the 20th century. The ship had set sail that morning from Kingstown [Dún Laoghaire ] for Holyhead, Wales. On that morning the Leinster carried about 180 civilians, 77 crew, some 500 soldiers and 22 postal workers. She was only just over the horizon soon after 10am that morning when disaster struck. The first torpedo hit her forward on the port side which blew open the mail sorting office aboard and killed many of the Royal Mail employees.

RMS Leinster (2,640 gross tons) was built in 1897 at Laird Brothers, Birkenhead for the City of Dublin Steam Packet Company. At the time she was one of the fastest ships at sea with a speed of 24 knots.

Captain Birch ordered the ship to make a U-turn in an attempt to return to port but the ship began to settle slowly by the bow; however the ship sank rapidly after a third torpedo struck her, causing a huge explosion. Attempts were made to launch the lifeboats but panic ensued as there was a mad scramble for them.

The ship's log states that she carried 77 crew and 694 passengers on her final voyage and at least 564 people are known to have been drowned - the vast majority serving military personnel from the British Army, Royal Navy and the RAF. Captain Birch was lost in the rescue operation undertaken by HMS Lively, Mallard & Seal. Survivors were brought ashore at Kingstown where emergency services treated them.

Ironically the U Boat that sank her was herself lost soon after. The UB-123 was probably lost in a minefield in the North Sea on its way back to Germany, on or about 19 October 1918. The bodies of her commander Oberleutnant zur See Robert Ramm and his crew of two officers and thirty-three men were never recovered.

The sinking of the Leinster had international ramifications. Delicate behind the scenes negotiations were going on to bring the War to an end. When US President Wilson heard the news he stalled the talks telling the Germans that, amongst other things there could be no peace as long as Germany attacked passenger ships. This was technically true but the ship was protected by Royal Navy sailors and armed with a 12 pounder. She was painted in camouflage colours and was carrying serving military personnel returning to Active Service. To the Germans she would have been seen as a legitimate target.

Nevertheless within days the German High Command realised the game was up. On 21 October Reinhard Scheer, Admiral of the German High Seas Fleet, signalled his submarines:

"To all U-boats: Commence return from patrol at once. Because of ongoing negotiations any hostile actions against merchant vessels prohibited. Returning U-boats are allowed to attack warships only in daylight. End of message. Admiral."

One Month later the War was over. In the months and years that followed the loss of the Leinster was forgotten due to the great events that followed in Ireland in the aftermath of the War. It is only within the last decade or so that this tragedy has finally been given recognition as something that has its place in Irish History.