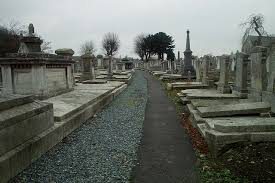 19 September 1836: Mount Jerome Cemetery, Dublin, was consecrated on this day. The name of the cemetery comes from an estate established there by the Reverend Stephen Jerome, then vicar of St. Kevin's Parish. Opened on a forty-seven acre site in Harold's Cross, by the General Cemetery Company of Dublin (which was constituted by an Act of Parliament in 1837).
Mount Jerome was the first privately owned cemetery in Ireland, when it first opened in 1836. It is one of the most impressive of Dublin's cemeteries. Mentioned in James Joyce's Ulysses, Mount Jerome was the burial ground for many of Dublin's Protestant businessmen and their families. It has witnessed over 300,000 burials but it was not until the 1920's that the first Catholic burials took place there. Mount Jerome has a large number of highly ornate crypts and memorials. A series of sunken roads throughout the grounds allows for below ground access to many of the crypts.
Many well-known people are buried there. There is a large plot to the deceased members of the Royal Irish Constabulary (RIC) & the Dublin Metropolitan Police (DMP) and the remains of the French Huguenots from the St Stephens Green Cemetery, as are also prominent members of the Guinness family. Amongst its more notable internees are: Sir William Wilde, Thomas Davis, Joseph Sheridan Le Fanu, John Millington Synge, Æ (George Russell), Jack B. Yeats, Sir William Rowan Hamilton and George Petrie.
Posted by Columba Iona at 12:23