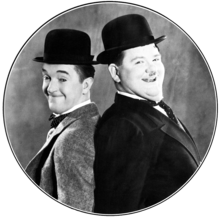 9 September 1953: Laurel & Hardy arrived in Cobh Co Cork to a rapturous reception. The famous duo stepped off a liner from the USA at the start of their final tour of the Music Halls & Theatres of Britain and Ireland.

Stan Laurel and Oliver Hardy had become a spectacularly famous comedy duo in the 1920s and 1940s in America & across the World with a series of slapstick films that relied heavily on old style theatrical vaudeville comedy sketches as a template upon to which to build their output. They both had successful careers in  film and on the stage before they permanently teamed up in 1927.They appeared as a team in 107 films, starring in 32 short silent films, 40 short sound films, and 23 full-length feature films. By the late 40s though their routine was jaded and the World of Entertainment was starting to pass them by. They were not the draw they once were and film work started to dry up.

In 1950–51, Laurel and Hardy made their final feature-length film together, Atoll K. During the filming, Hardy began to lose weight precipitously and developed an irregular heartbeat. Laurel was experiencing painful prostate complications as well. The film was not a commercial success on its first release and it brought an end to Laurel and Hardy's film careers. They carried on with stage performances and had a successful tour in Europe in 1952. They decided to return to these islands the following year for one final round of their routine.

It was when they arrived in Cobh that day back in 1953 that they realised that whatever about the Hollywood Moguls the ordinary cinema going folk had nor forgotten them but turned out in droves to welcome them ashore. Laurel recounted their reception:

The love and affection we found that day at Cobh was simply unbelievable. There were hundreds of boats blowing whistles and mobs and mobs of people screaming on the docks. We just couldn't understand what it was all about. And then something happened that I can never forget. All the church bells in Cobh started to ring out our theme song "Dance of the Cuckoos" and Babe (Oliver Hardy) looked at me and we cried. I'll never forget that day. Never.

On May 17, 1954, the pair made their last live stage performance in Plymouth, UK at the Palace Theatre. Oliver Hardy died in 1957 and Stan Laurel passed away in 1965. But they have never been forgotten and their deadpan comedies are still aired even today.