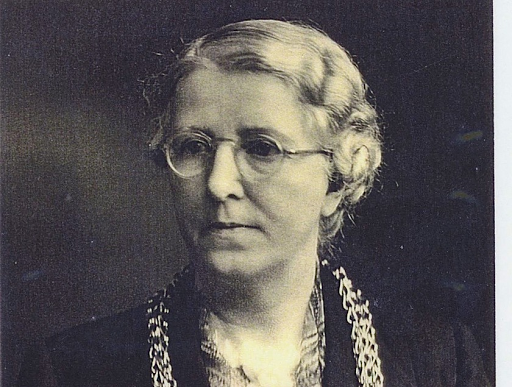 29 September 1972: The death of Kathleen Clarke née Daly on this day. She was the widow of Thomas Clarke who had been executed by the British after the 1916 Rising. However she was also a political activist in her own right especially in the years after the Rising and in the early years of the Irish Free State.

She was born in Limerick in 1878 into a large family with connections to the Fenian Movement. In her early adulthood Kathleen went into the dressmaking business and did well for herself. When Thomas Clarke came out of prison in 1898 she was introduced to him by her Uncle. They quickly fell in love and married in New York in 1901. She was 23 years old and he was over 40.

Tom worked for John Devoy and the American Fenian group, Clan na Gael whose aim was to rid Ireland of British Rule. They returned to Ireland in 1907 with their young family in order to play their part in the coming struggle. He opened a tobacco shop in Dublin’s City Centre. In between having more children she was active as a founder member of Cumann na mBan, and worked hard at fundraising as well as raising her family and helping to run the shop.

After the week-long fighting and the surrender, Kathleen was taken to visit her husband in Kilmainham Jail the night before his execution. The interview lasted almost two hours, then Kathleen had to leave; Tom was shot in the early morning on 3 May. The following night she was back in the jail, with two of her sisters, to say goodbye to their brother Ned; he was executed on 4 May.

In May 1918 she was arrested by the British and spent 11 months in Holloway Jail in England. In 1919 she was elected as an Alderman for the Wood Quay and Mountjoy Wards of Dublin Corporation. In 1921 she was elected to the 2nd Dáil and afterwards she opposed the Treaty. She joined Fianna Fail on its foundation in 1926 won was elected a TD in the 1st election of 1927 but lost it in the 2nd contest of that year. She was the elected to the 1st Seanad in 1928 and served until its abolition in 1936.

In 1930 she was elected to the re-constituted Dublin Corporation for Fianna Fáil. She opposed the Constitution of Ireland of 1936 as she felt that several of its sections would place women in a lower position that they had been afforded in the Proclamation of the Irish Republic.

The peak of her political career came in 1941 when she became the Lord Mayor of Dublin. She was the first woman to hold that Office. She declined to stand as a Fianna Fáil candidate at the 1943 general election She helped found the Irish Red Cross while Lord Mayor of Dublin. However she split from De Valera & FF after that and contested the 1948 election for Clan na Poblactha but was not elected.

She died in a Liverpool Nursing Home in 1972 and was given a State Funeral. She is buried in Dean’s Grange Cemetery in Dublin. Her gravestone is inscribed with the name she wished to be known by: Caitlín Bean Uí Chléirigh (Kathleen, Mrs Clarke).