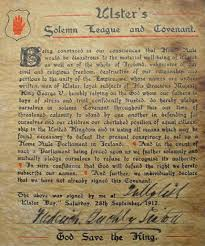 28 September 1912: 'Ulster Day' The signing of the Solemn League and Covenant on this day. It was signed by the Loyalist men of Ulster and the women signed a similar Declaration. It was taken by some 500,000 Ulster Unionists in protest against the passing of the Third Home Rule Bill by the British Parliament. Sir Edward Carson was the first person to sign as the leader of the Ulster Unionist Party.

This public avowal of repudiation of the terms of the Bill alerted the political establishments in both Britain and Ireland and generated a major Constitutional Crises was that would split Nations and Parties apart.

The Covenant ran as follows:

BEING CONVINCED in our consciences that Home Rule would be disastrous to the material well-being of Ulster as well as of the whole of Ireland, subversive of our civil and religious freedom, destructive of our citizenship, and perilous to the unity of the Empire, we, whose names are underwritten, men of Ulster, loyal subjects of His Gracious Majesty King George V., humbly relying on the God whom our fathers in days of stress and trial confidently trusted, do hereby pledge ourselves in solemn Covenant, throughout this our time of threatened calamity, to stand by one another in defending, for ourselves and our children, our cherished position of equal citizenship in the United Kingdom, and in using all means which may be found necessary to defeat the present conspiracy to set up a Home Rule Parliament in Ireland. And in the event of such a Parliament being forced upon us, we further solemnly and mutually pledge ourselves to refuse to recognise its authority. In sure confidence that God will defend the right, we hereto subscribe our names.

And further, we individually declare that we have not already signed this Covenant.

However the key words within that were to have such fraught consequences were 'using all means which may be found necessary to defeat the present conspiracy to set up a Home Rule Parliament in Ireland.'

This opened the way for the importation of arms into Ireland, firstly for the Ulster Unionists and later by Irish Nationalists. The introduction of the concept of armed force to settle political affairs was to have terrible repercussions that has lasted right up until modern times in Ireland.