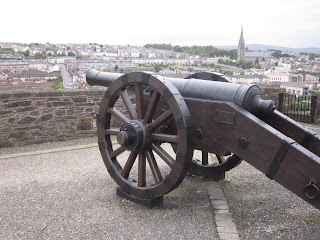 7 September 1948: An Taoiseach John A Costello announced in Ottawa, Canada that the Irish Free State would leave the Commonwealth by repealing the 1936 External Relations Act and declaring Ireland a Republic. This shock announcement at a Commonwealth Conference was greeted at home with some puzzlement, as he had given no indication before his departure that such an action was contemplated.

Rumour circulated that Costello had been piqued when at a Dinner hosted by Earl Alexander, the Governor General of Canada and a dyed in the wool Ulster Unionist, the Taoiseach had looked down the barrels of table top sized miniatures of the guns that had held Derry in 1689! Specifically a miniature replica of the famous ‘Roaring Meg’ cannon [above].Chagrined at this insult he had called hastily arraigned press conference and announced his momentous decision.

Whatever the truth of the matter (and Costello denied this tale) when he returned home he brought forward a Bill that he claimed:

Was not conceived nor is it brought into this House in a mood of flamboyant patriotism or aggressive nationalism, nor in a spirit of irresponsible isolationism…

The Bill was passed and the Republic of Ireland came into being on 1 January 1949 with the State leaving the British Commonwealth as a result.