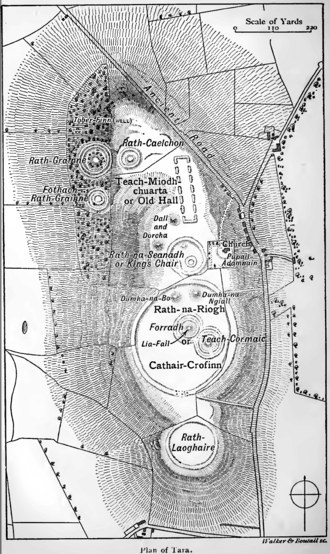 2 September 1022 AD: The death of the King of Mide & High King of Ireland, Máel Sechnaill mac Domnaill, on this day. His passing marked the end of an era in Irish History. Since the Battle of Ocha in circa 483 AD the southern and northern O’Neill’s had shared the title of King of Temair (Tara) [above] between them on a more or less continual basis. This made the holder of the title the most influential king in Ireland - if he had the wherewithal to make use of the status the title gave him.

For it was believed that in ancient times Ireland had been ruled from the Royal seat of Tara. The O’Neills believed that any man who held that hallowed ground was the heir to a lost Kingdom. However Brian Boru of Munster in 1002 had pushed aside King Máel and had himself recognised as the superior king in his stead.

It was only with the death of King Brian at the Battle of Clontarf in 1014 that Máel Sechnaill had regained his position. But by then he was an old man and Ireland had changed greatly since his predecessors had established their dual kingdoms all those centuries before. After him Mide(Meath) would no longer be the force it was in Irish Wars and Politics.

Mael Sechnaill son of Domnall son of Donnchad, overlord of Ireland, pillar of the dignity and nobility of the western world, died in the 43rd year of his reign and the 73rd of his age on Sunday the fourth of the Nones 2nd of September, the second of the moon.

Mael Sechnaill son of Domnall, son of Donnchad, overking of Ireland, the

flood of honour of the western world, died in Cró-inis of Loch Aininne in

the forty-third year of his reign on the 4th of the Nones 2nd of September,

that is, on Sunday, the second day of the moon, the one thousandth and

twenty-second year after the Lord's Incarnation, and died penitent and at

peace, with the successors of venerable saints Pátraic and Colum Cille and

Ciarán present and assisting him.