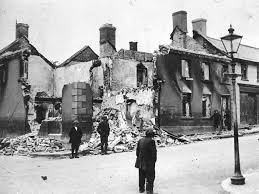 20 September 1920: The sack of Balbriggan on this day. The then village of Balbriggan is situated some 20 miles north of north of Dublin City. On that day and night 100 years ago the Forces of the British Crown went on a rampage of looting, arson and destruction that culminated in the Murder of two local men who had been taken in for questioning by Special Constables  of the RIC  know as the ‘Black & Tans’.

The catalyst of this outbreak of vandalism and Murder had begun in a Public Bar in the town earlier in the night. Two members of the RIC Head Constable Peter Burke and his brother, Sergeant Michael Burke had stopped for a drink and became involved in a fracas with the clientle. The local police arrived, thought they had settled and left the scene. Alerted to the presence in the pub of two members of the RIC the IRA raided the premises and in an altercation that followed the two Constables were shot at close range. Peter Burke was shot dead and his brother seriously wounded.

At about 11pm, trucks carrying 100–150 Black and Tans arrived in Balbriggan from Gormanston. They began burning homes and businesses, smashing windows and firing in the streets. Witnesses said the Black and Tans were cheering and laughing during the attack. In all, 49 homes were destroyed or damaged, twenty of them on Clonard Street. Many townsfolk fled to the fields. The Dublin Evening Mail reported "men, women and children, some of them only scantily attired…fleeing to the country for refuge" and described how "a poor woman experienced great difficulty in getting her baby from its cot before her house was fired".

Four pubs were looted and burnt down.John Derham, a Sinn Féin town commissioner, was arrested and his pub was wrecked and burnt. He was punched in the face and clubbed with a rifle butt. His son Michael was beaten unconscious and left in the burning building. Other businesses were also attacked. A hosiery factory, Deeds & Templar, was destroyed. It had employed 130 workers and a further 180 who did work for it from home.

Two local men, dairyman Seán Gibbons and barber Seamus Lawless, were taken to the town's police barracks for questioning. They were beaten and bayoneted to death and their bodies dumped on Quay Street, near the barracks. According to The Guardian, "one was the chairman and the other was the acting secretary" of the local IRA battalion. A plaque on Quay Street commemorates the men, and a remembrance ceremony is held there every year.