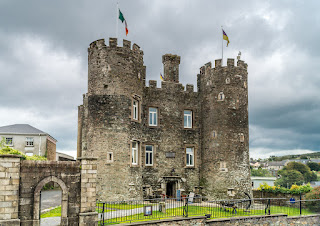 15‭ August 1569: The sack of Enniscorthy on this day by Sir Edmund Butler, the brother of the Earl of Ormond. The Co Wexford town held a great Fair on this date, named ‘Lady Day’ after Our Lady the Mother of Christ. This date in August is celebrated in the Catholic Calendar as the Feast of her Assumption into Heaven.

This was one of the great Medieval Fairs of Ireland where people would come from miles around to trade and buy the wares on offer.‭ Many valuable commodities would be available and those with the coinage to buy or goods to barter would be there in plenty. But the Fair this year was held against a backdrop of a vicious War full of atrocities and counter atrocities committed by both sides. As the townsmen and country folk went about their business a large Geraldine raiding party overcame them. This was no doubt a well planned operation, designed to loot and punish the inhabitants who considered themselves under the protection of the Crown of England.

The Earl of Ormond,‭ ‬i.e. Thomas…, being at this time in England, his two brothers, Edmond of Caladh and Edward, had confederated with James, the son of Maurice. These two sons of the Earl went to the fair of Inis-corr on Great Lady-Day; and it would be difficult to enumerate or describe all the steeds, horses, gold, silver, and foreign wares, they seized upon at that fair. The Earl returned to Ireland the same year, and his brothers were reconciled to the State.

No quarter was given to the hapless inhabitants.‭ Many of the Anglo-Irish Merchants were put to death and their bodies thrown in the River Slaney and their womenfolk raped. It was reported that ‘divers young maidens and wives’ were defiled before their parents and husbands faces’.  The Castle of Enniscorthy was also taken and ransacked and lay abandoned for thirteen years thereafter.