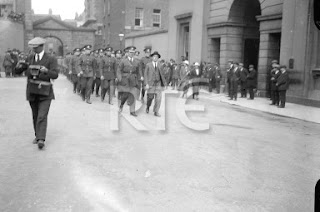 17 August 1922: The transfer of Dublin Castle by the British to the Provisional Government of the Irish Free State was completed on this day.

The Castle loomed large in the consciousness of the Irish People as the source and origin of many of their troubles. It was from here that the Crown of England through its Justiciars, Viceroys, Lord Lieutenants & latterly its Chief Secretaries attempted with various degrees of success to administer the Country they claimed the Right to rule over.. ‘The Castle’ - as it was commonly referred to - was an imposing structure that dated back to the early 13th century when King John gave orders for its construction. It was completed by 1230 and the Great Courtyard (Upper Castle Yard) of today corresponds closely with the fortification.

Though its origins go deeper into the past as ‘The Castle’ stands on the high ridge, the highest ground in the locality, at the junction of the River Liffey and its tributary the (now underground) Poddle, which formed a natural boundary on two sides. It is very probable that the original fortification on this easily defended strategic site was a Gaelic ráth [ringfort], which guarded the hurdled ford across the river Liffey [Átha Cliath], the adjacent Dubhlinn [Blackpool] monastic settlement and the four long distant roads that converged nearby that made Dublin such an important site. In the 940's, a Viking fort stood on this site when they decided to 'over-winter’ here and make a permanent settlement and berth their longships in black pool to the south of where the Castle now is.

The structure built on the orders of King John  had large sturdy walls and four round towers to protect it from attack by the Irish. The south-east Record Tower is the last intact medieval tower, not only of Dublin Castle but also of Dublin itself. It functioned as a high security prison and held native Irish hostages and priests in Tudor times.

So strong and well-defended was it and so important to the Crown that it never fell to attack. It was besieged in 1537 during the Revolt of Silken Thomas, almost taken in the Rising of 1641 and later occupied by the soldiers of the English Parliament under Cromwell. In 1798 it again came under threat and at Easter 1916 the insurgents of the Irish Citizen Army attempted to seize it by coup de main but without success.

But with the signing of the Treaty in December of 1921 the British had agreed to withdraw from most of Ireland and the days of the Castle as the centre of British Power in this Country started to draw to a close. While the British Army pulled out in January 1922 the transfer of administration took months to organise.

Thus the day came about in August 1922 when the last contingent of the members of the Royal Irish Constabulary (RIC) marched out and the first detachment of the Civic Guards (later the Garda Síochána) marched in, led by the first Garda Commissioner Michael Staines & Chief Superintendent McCarthy. At last ‘The Castle’ was fully in Irish hands.