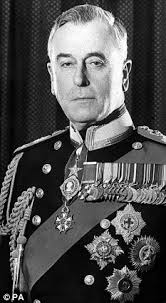 27 August 1979: Lord Mountbatten was assassinated  by the IRA on this day. Albert Victor Nicholas Louis Francis Mountbatten Admiral of the Fleet , 1st Earl Mountbatten of Burma, KG, GCB, OM, GCSI, GCIE, GCVO, DSO was the most senior member of the British Establishment ever to be killed by the IRA in their campaign against British rule in Ireland. He was blown up while sailing in his yacht at Mullaghmore,‭ ‬County Sligo. He was accompanied by members of his family and a local boy. Three of them were killed and others seriously injured.

He had served with distinction in the Royal Navy from the time of the First World War in 1916 to the conclusion of the Second World War in 1945. He was sunk at sea as captain of  HMS Kelly in 1941. He was then made Chief of Combined Operations where he had some success and some failures, notably the disastrous raid on the port of Calais in 1942. He ended that War as  Supreme Allied Commander of the Southeast Asia Theatre where he oversaw the British campaign to retake Burma from the Japanese Army and the surrender of their troops in Malaya when the War ended.

Probably his most controversial role was in 1947 when he became the last Viceroy of India charged with handing over the Administration of India’s many parts to local rulers and politicians. He has been criticised for too hasty a withdrawal and the terrifying levels of violence that erupted between Muslims, Sikhs and Hindus that resulted when India was partitioned. Nonetheless he got Britain out of a situation in double quick time that had the potential to turn into a Quagmire for the Imperial Power.

His Life was something of an anti climax after that but he remained a well known figure and while at times controversial with a tendency to meddle in the backwaters of British politics he remained a respected figure with the general public in the UK.  Though some of the more lurid tales of his antics in the 'Swinging Sixties’ England should be taken with a grain of salt.

That same afternoon at Warrenpoint, County Down, the IRA killed 18 British  soldiers, most of them members of the elite Parachute Regiment, in a double bomb attack. An innocent bystander on the Republic’s side of the border was also killed in retaliatory fire by the Paras

This was the greatest loss of life suffered by the British during the Conflict and caused shock waves throughout the British Establishment and with the general British Public.‭ The news of these events immediately spread around the World and made the North an International News story. Mountbatten, a great-grandson of Queen Victoria and uncle to Prince Charles was a very senior member of the British Royal Family. They felt his death at the hands of the IRA very keenly.

Soon after a grisly‭ Graffiti appeared on Belfast walls. It read:

13‭ ‬gone but not forgotten - we got 18 and Mountbatten.

This referred to the role of the Parachute Regiment in the Bloody Sunday massacre in Derry in 1972. Strangely enough the deaths of the Paras at Warrenpoint was a footnote to the press coverage that was given to the death of Mountbatten at the hands of the IRA.