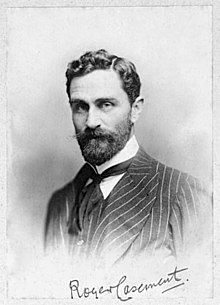 3‭ August 1916: Roger Casement was hanged at Pentonville Prison London on this day.

He ‭was tried by the British for Treason as he had endeavoured to enlist German help to free Ireland at a time when Britain and Germany were at War.

He was born in Dublin in‭ 1864. His father was an Officer in the British Army. From 1895 onwards he worked for the British Foreign Office in a Consular capacity. He was sent to the Congo where he reported on the widespread abuses there against the Natives by the Belgian Colonialists. These reports earned Casement a CMG (Order of St Michael and St George) in 1905. He was then sent to Brazil and was commissioned to undertake an investigation on the reported abuse of workers in the rubber industry in the Putumayo basin in Peru. He once again found many instances of abuse and exploitation by the Rubber Barons there and was rewarded a Knighthood in 1911 for his services to Humanity.

But by‭ 1912 Casement had become disillusioned with European Colonialism of which he found himself a reluctant part though albeit in a pacific role. At Home he had become a member of the Gaelic League and a strong Nationalist. He viewed with abhorrence the events in the North (his father was from Antrim) and was totally against Partition.

In August 1914 he was in the USA raising funds for the Irish Volunteers when the Great War broke out. He soon made contact with Clan na Gael and John Devoy put him in contact with German Diplomats in New York. He made his way to Germany to raise military and financial support for a Rising in Ireland but met with little success. In particular his attempt to raise an Irish Brigade from amongst the Irishmen held as Prisoners of War was meagre. By this time the British Intelligence Service had latched onto his activities and set about undermining him.

When in early‭ 1916 Casement learnt of the high likelihood of a Rising in Ireland he requested to be sent home to be there. However by the time he sailed in a German Submarine he was of the opinion that it should not go ahead if the Germans could not offer considerable military assistance – and of that there was no real prospect given their huge commitments at that time. He felt that the German High Command were sending him to his Death otherwise. In the event Casement’s small party was put ashore at Banna Strand, Co Kerry in the early hours of Good Friday 21 April 1916. They were soon spotted by the locals who took them for German spies and they were arrested by the RIC. Casement was dispatched hastily to London and imprisoned to await his Fate.

His Trail for Treason was conducted at the Old Bailey.‭ ‬Despite the best efforts of his Legal Team the evidence against him was pretty clear cut and on the facts he could hardly expect to escape the Death Sentence. A campaign was underway to enlist support for an amelioration of the execution of any judgement past by the Court. Casement was a widely respected figure for his humanitarian work and it could possibly be argued that while he had erred in Judgement his past services to Humanity should be taken into account.

But during the Trial the British produced the infamous‭ ‘Black Diaries’ that they claimed were written in Casement’s own hand and showed him to be a Homosexual with a marked predilection for young boys he picked up while engaged in his work abroad. These Revelations proved a Sensation and as intended destroyed Casement’s Character and Reputation in the circles where his cause was most likely to find support. He vehemently denied all the accusations against him.

He was found Guilty of Treason and sentenced to death.‭ He was 51 years old and had been received into the Catholic Faith in the hours before he made his way to the Scaffold. He received the Last Sacraments and died as he said with the body of his God as his last meal.

His body was buried in quicklime in the grounds of the Prison.‭ ‬There it remained until 1965 when the Labour Government of Harold Wilson agreed to hand it over the Republic of Ireland on condition he was not buried in the North (Casements' wish). He was given a full State Funeral and interred in Glasnevin Cemetery Dublin. President Eamon de Valera himself gave the graveside oration.