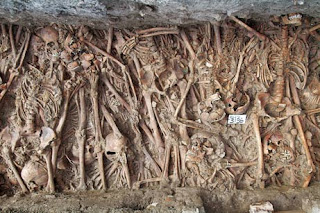 1 August 664 AD: A great Plague arrived in Ireland and swept the Country killing huge numbers of people. The ‘Great Mortality' was possibly a return of the Buide Conaill which had swept through Ireland in the 6th century. The 'Yellowness of Conaill' might perhaps refer to a prominent individual who had been amongst its first victims, as in the 20th century the 'Spanish Influenza' refers to King Alfonso XIII of Spain catching it - though he survived! A jaundice like fever was perhaps the root of the disease.

But it has been advanced that the Plague of 664 and the years following was actually a bubonic plague caused by rats - though the rat population in Ireland at that time is a matter of conjecture. Rats in large numbers are usually needed for that disease to take off and places of dense urbanity are their preferred locations - which Ireland did not possess at that time. However we cannot be sure that the plague that arrived in 664 was a new strain of bubonic plague or the same type as that of the earlier one - or indeed another disease altogether!

The plague of 664 broke out on or about the 1st August that year after a warm summer which was followed by a warm autumn (ideal for the spread of plague) and continued into 665, and broke out with renewed violence in 667-668. It then quietened down for about a decade and a half but flared up again in 683-684 when it was described as the mortalitas puerorum (death of boys). Children seem to have been more heavily affected then because they had no resistance to it.

A great mortality in Ireland came on the calends of August i.e. in Magh Itha in Leinster.

The Annals of Tigernach 664 AD

The plague reached Ireland on the Kalends of August.

After Diarmaid and Blathmac, the two sons of Aedh Slaine, had been eight years in the sovereignty of Ireland, they died of the same plague.

There died also Maelbreasail, son of Maelduin, and Cu Gan Mathair, King of Munster; Aenghus Uladh. There died very many ecclesiastics and laics in Ireland of this mortality besides these.

Annals of the Four Masters 664 AD

This Plague also struck in Britain, first along the southern coast before spreading north into Northumbria. It is more than likely that it spread from Britain into Ireland along the same channels. Many men of the English Nation then resided here and studied or practised the religious Life in Irish Monasteries. This was all given free of charge! The Venerable Bede recorded this Plague and it is the first such one recorded in the history of that Country:

IN the same year of our Lord 664, there happened an eclipse of the sun, on the third day of May, about the tenth hour of the day. In the same year, a sudden pestilence depopulated first the southern parts of Britain, and afterwards attacking the province of the Northumbrians, ravaged the country far and near, and destroyed a great multitude of men.

Moreover, this plague prevailed no less disastrously in the island of Ireland. Many of the nobility, and of the lower ranks of the English nation, were there at that time, who, in the days of the Bishops Finan and Colman, forsaking their native island, retired thither, either for the sake of sacred studies, or of a more ascetic life; and some of them presently devoted themselves faithfully to a monastic life, others chose rather to apply themselves to study, going about from one master’s cell to another. The Scots willingly received them all, and took care to supply them with daily food without cost, as also to furnish them with books for their studies, and teaching free of charge.