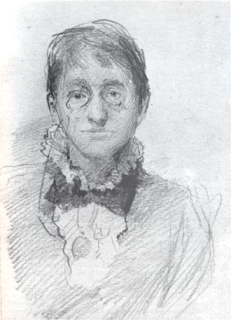 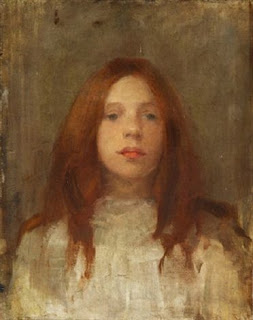 7 August 1943: The death in Dublin of famous portrait artist Sarah Purser on this day.

She was born in Kingstown/ Dun Laoghaire on 22 March 1848. She was the daughter of Benjamin Purser and Ann Mallet. The family moved to  Dungarvan County Waterford, a seaside market town nestled beneath the Comeragh mountains soon after her birth and lived firstly in Strand side South, Abbeyside, which is now the home of the Parish Priest. Later they moved to a house called 'The Hermitage' in Abbeyside. Sarah lived here for about 25 years.

Her father was involved in brewing and flour milling while in Dungarvan. At the age of 13 Sarah was sent to school in Switzerland for two years. She left Dungarvan in the summer of 1873 to make her living as a painter and settled in Dublin. There she trained in the Metropolitan School of Art and later went to the Academie Julian in Paris and also to Italy. She became a highly successful portrait painter and an important figure in the Irish art world at the turn of the century.

She worked mostly as a portraitist eg [above] 'Girl with red hair'. She was also associated with the stained glass movement, founding a stained glass workshop, An Túr Gloine, in 1903. Some of her stained glass work was commissioned from as far as New York, including a window at Christ Church, Pelham, dedicated to the memory of Katharine Temple Emmet and Richard Stockton Emmet, grandson of the Irish patriot, Thomas Addis Emmet. Through her talent and energy, and owing to her friendship with the Gore-Booths, she was very successful in obtaining commissions, famously commenting "I went through the British aristocracy like the measles."

"some of her finest and most sensitive work was not strictly portraiture, for example, An Irish Idyll in the Ulster Museum, and Le Petit Déjeuner (in the National Gallery of Ireland)."

When she founded An Tur Gloine, she was instrumental in drawing the attention of the art world to the works of John Yeats and Nathaniel Hone. She exhibited widely in Dublin and London. At the Royal Hibernian Academy, the Irish Fine Art Society in Dublin. At the Royal Academy, Grosvenor Gallery, Fine Art Society and New Gallery in London and the Walker Art Gallery in Liverpool. In 1886 she founded the Dublin Art Club and in 1890 the RHA elected her an Honoury Member.

Sarah Purser became wealthy through astute investments, particularly in Guinness. She was very active in the art world scene in Dublin and was known as an entertaining host - to those that pleased her. She was involved in the setting up of the Hugh Lane Municipal Gallery, persuading the Irish government to provide Charlemont House to house the gallery.

In 1923 she became the first female member of the Royal Hibernian Academy. She persuaded W.T. Cosgrave to give Charlemont House in Dublin as a modern Art Gallery and also to house the Hugh Lane collection. Until her death she had lived for years in Mespil House, a Georgian mansion with beautiful plaster ceilings on Mespil Road, on the banks of the Grand Canal. It was demolished after she died and developed into apartments. She is buried in Mount Jerome Cemetery.