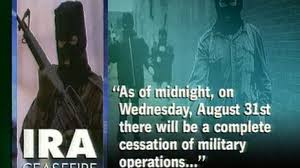 31 August 1994: The IRA announced a complete cessation of military activities on this day as their long awaited ‘Ceasefire’ came into effect. The efforts to bring the Provisional IRA to this point had been years in the making but had faced many obstacles along the way, both within and without the Republican Movement.

The IRA announced: "Recognising the potential of the current situation and in order to enhance the democratic process and underlying our definitive commitment to its success, the leadership of the IRA have decided that as of midnight, August 31, there will be a complete cessation of military operations. All our units have been instructed accordingly....

The genesis for moving away from violence and towards a purely peaceful strategy began at the time of the 1981 Hunger Strikes when a number of republican representatives were elected both North and South of the Border - most notably Bobby Sands who was on hunger strike in the Long Kesh prison camp at the time.

In the aftermath of those events Sinn Fein decided to contest elections across Ireland and while initially any success they had was in the North they had made a start and there was no going back.

Gerry Adams and Martin McGuinness, as the acknowledged leaders of the Republican Movement, were the two individuals most closely associated with developing a strategy that would see a metamorphosis of Sinn Fein into a purely political Party and an end to its support for the IRAs campaign. However they realised that at the end of the day only the IRA could call it.

Initially there was scepticism and hostility in many quarters but a number of factors, some positive and some negative helped push things along the way.

On the positive side was the election of Bill Clinton as President of the USA from 1991, a man with an Irish background and a real interest in helping to bring Peace about. Here in Ireland the appointment of Albert Reynolds as Taoiseach in 1992 brought to power a man of calibre who carried no baggage on the issue and was prepared to take risks to get the end result. In Britain John Major became Prime Minister in 1990 and if not as committed as others to the process he was of a practical turn of mind who was prepared to cut a deal at the end of the day.

On the negative side many people, not least in Nationalist areas of the North of Ireland were sick and tired of years of violence with no end in sight. The yearning for Peace was high and in addition the Loyalist paramilitaries had been re armed and re organised and were launching effective counter strikes of their own. The British Army were still on the streets. Though the IRA were well armed and motivated it was clear the Armed Struggle had reached Deadlock.

The Hume Adams initiative was an internal attempt by Adams and John Hume, the leader of the SDLP, then the biggest nationalist party in the North, to develop a framework for Peace but was stymied by its utter rejection by Unionists and the British Government. The Unionist community did not trust what was happening and were wary of any initiatives that emanated from Dublin or indeed from any parties on the Nationalist side. Major in turn was reliant on Unionist votes to keep him in power and would not risk pushing them too far. Albert Reynolds had other ideas and had Hume and Adams sidelined as he went for cutting a deal with the British Prime Minister that would put them in the driving seat and steering the process down a road that all could follow.

Thus came about in December 1993 the 'Downing Street Declaration' when Reynolds and Major issued a joint statement which laid out the guidelines on which a settlement could be built.

It argued for self-determination on the basis of consensus for all the people of Ireland. It argued that any agreement had to be based on the right of people on both parts of the island to "exercise the right of self determination on the basis of consent freely and concurrently given, North and South, to bring about a united Ireland if that is their wish." Not everyone was happy with this but at least there was now something to build upon.

Another significant breakthrough came at the end of January 1994 when Gerry Adams was given a 48 hour visa to visit the USA in order to be able to convince Republican supporters to support his efforts to stop the violence. The visa was granted on the personal authority of Bill Clinton, despite the opposition of his own State Department, FBI, CIA and speaker of the House, Tom Foley.

That same month the broadcasting ban under Section 31 of the Broadcasting Act was lifted in the Republic of Ireland. This allowed Sinn Féin access to the Irish media and marked the end of official political censorship in the South.

At Easter 1994 the IRA announced a three day ceasefire and across Ireland there was a growing expectation that a permanent one would follow. Behind the scenes the Irish government had given written assurances that in the event of an IRA cessation, it would end its marginalisation of the Sinn Féin electorate and that there would be an early public meeting between Taoiseach Albert Reynolds, John Hume and Gerry Adams.

Despite some twists and turns and secret negotiations the momentum held. Not even shocking acts of violence like the Shankill road bombing in October 1993 in which eleven innocent people were killed by an IRA bomb and the revenge murders by the UVF at Greysteel were enough to derail the process. When it came though many were relieved that what had seemed almost impossible had at last come about. It was a seminal moment in Modern Irish History.