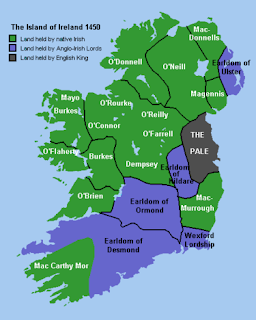 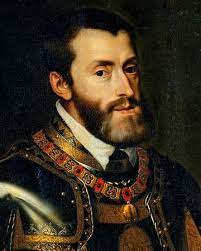 12 September 1528: James FitzGerald, 10th Earl of Desmond wrote to the Holy Roman Emperor Charles V  requesting military assistance against the English. The Earl was a very rich and influential Anglo-Irish Magnate whose family were descended from the Anglo-Norman Lords who came over at the time of the attempted Conquest of Ireland in the 12th Century.
But he and many of his associates were deeply troubled at the turn of events in England as King Henry VIII sought to expand his power in Ireland by subduing the Great Lords of Ireland to his will. The Earl of Desmond was of the opinion that the English feared a prophecy that one day that Country would be conquered by one of his family - and in his eyes his family was a Royal one. He certainly was a very powerful man who ruled over much of the south west of Ireland and controlled three out of the four major ports of the island - namely Cork, Waterford and Limerick. Only Dublin was beyond his reach. His word was Law in his own lands and none dare oppose him except on peril of death.
The Emperor commissioned his chaplain Gonzalvo Fernandez to visit Ireland and report back on the character and strength of this Earl from across the seas who so desperately sought his help against the King of England. He duly reported back on  the resources of the country, of the demeanour of the Earl, and his reasons for hostility to the king of England. He stated that:
'The Earl himself is from thirty to forty years old, and is rather above the middle height. He keeps better justice throughout his dominions than any other chief in Ireland. Robbers and homicides find no mercy, and are executed out of hand. His people are in high order and discipline. They are armed with short bows and swords. The Earl's guard are in a mail from neck to heel, and carry halberds. He has also a number of horse, some of whom know how to break a lance. They all ride admirably, without saddle or stirrup.'
Gonzalvo Fernandez Dingle 28 April 1529
The proud Earl added his own words to this appeal, stating that he could put over 16,000 men in the field but was in need of cannon to take the castles of the English.
And for myself, I promise on my Faith to obey your Majesty in all things. I will be friend of your friends enemy of your enemies and your Majesty's especial and particular subject.
JAMES OF DESMOND
Charles V was the most powerful man in the western World at that time, ruling over a vast Empire stretching across much of western Europe and into the Americas. He was also a very devout Catholic with a deep suspicion and contempt for Protestantism. But in effect Charles V had too many problems of his own to deal with in Germany, Spain & with France and also against the Turks to be able to offer any effective aid to his co religionist in what was to him a far flung island in the Atlantic Ocean that could not really alter the Balance of Power in Europe.
However while this particular appeal to get outside help  to resist the Crown of England’s attempt to dominate Ireland did not succeed it was by no means the last. Indeed such appeals for arms & finance from abroad has been a part and parcel of revolts against London right into the late 20th century.
Posted by Columba Iona at 05:20