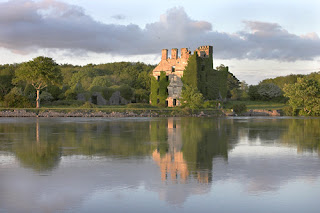 4 September 1828: The Annaghdown/Anach Cuain Boat Tragedy. Eleven men and eight women were drowned on the river Corrib aboard an old and decrepit boat the Caisleán Nua. The tragedy was the subject of a poem by Anthony O’Rafferty 'Anach Cuain'. On September 4th, 1828 the boat left Annaghdown Pier bound for a fair at Galway City. On board were some sheep, which were for auction at the fair, and some thirty men and women who had intended to make a holiday out of the visit to Galway. Some two miles from the city on the river Corrib tragedy struck.

It is not quite certain what caused the boat to sink, but the story is told that one of the sheep on board got restless and poked his hoof through the floor of the boat. One of the men on board tried to stuff the hole with a piece of clothing but only succeeded in knocking a plank out of the boat which caused the water to pour in. Nineteen men and women on board drowned in the ensuing panic and scarcely a family in the village of Annaghdown remained unaffected by the tragedy.

The boat and passengers proceeded without obstruction until they arrived opposite Bushypark, within two miles of the town, when she suddenly went down and all on board perished except twelve persons who were fortunately rescued from their perilous situation by another boat.

One man on board was named John Cosgrave who was a strong swimmer. He saved several people and went back to save the woman he was shortly to marry. Some desperate people clung to him in a desperate bid to save themselves but only succeeded in drowning him also.

The recovered bodies of those who drowned were brought ashore near Menlo/Mionnloch Castle, [above] itself the scene of a tragic fire in 1910. It is now a ruin.