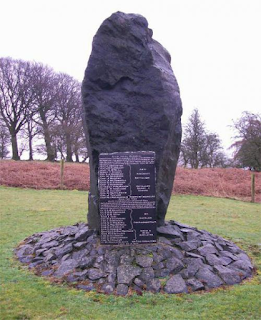 16 September 1941: Sixteen Irish Officers & men were killed while training in the Glen of Imaal, County Wicklow on this day. The Glen was and still is the main training and testing ground for the Irish Army. At the time of the tragedy the State had expanded its Army to meet any threat of invasion from either side in the Second World War. The troops involved in that days training were from an anti aircraft battalion based in Kildare.

They were being instructed in the use of anti tank weapons. What quite what happened no one now knows. But a warning was shouted that ‘you have seven seconds’ which suggests that the officer handling the thing sensed something had gone horribly wrong - too late! While 16 officers and soldiers were killed another three men were blinded for life and one went deranged and shot a man to death.

I heard the bang and I was carried was carried about 100 yards further...when I got up and went over you didn’t know who to render assistance to, it was an awful sight.

In 1958 a stained glass window commemorating the sixteen dead was installed in the Garrison Church in McKee Barracks. In September 1986, a memorial was unveiled in the Glen of Imaal, consisting of sixteen rick-stones and sixteen Mountain Ash trees arranged in a semi-circle around a 14 ton basalt monolith. A polished granite plaque on the monolith names the dead: