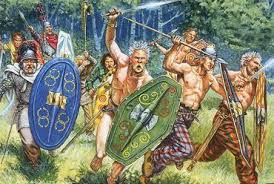 6 September 868: The Battle of Killineer/  Cath Cell ua nDaigri on this day. This clash of arms was fought just a few miles north-west of Drogheda, Co Louth but the exact location is now lost to us. The opponents were the forces of the King of Tara, Áed Findliath (‘light-grey’) of the Cenél nÉogain branch of the northern Uí Néill, against his dynastic rivals the Uí Néill of Brega [east Meath] who had as allies the Vikings of Dublin and the men of Laigin [south Leinster]. His own his nephew Flann son of Conaing was amongst his foes on the day of battle.

King Aed had for support King Conchobor of Connacht who seems to have contributed the bulk of the warriors. The northern king appears to have brought south with him just a picked force of about one thousand men. Aed was faced with what was an alliance by the kings of greater Leinster against his hegemony – as they all feared dominance by a king as powerful and as skilful as he.

In the event he defeated his enemies in what was probably a hard fought battle. It looks like the men of the East were the ones who opened the battle but were held in check. As both sides had more or less equal numbers its probable that the contest was a long drawn out affair. It certainly was a bloody one as the King of Brega and his ally Diarmait mac Etarscéle, the King of Loch Gabor were amongst the fallen. Many of the Vikings were also put to sword. But King Aed lost from amongst his own cousin Fachtna mac Mael Dúin, (the man selected to succeed him in the North) when he launched his own counter assault upon his enemies.

King Aed was one of the most successful kings to rule in Ireland in the 9th Century. He drove the Vikings out of the North and checked their power in north Leinster. He was also adept at keeping Irish rivals from usurping him from his seat. He died a peaceful death at the Monastery of Dromiskin, some 30 miles north of where this great battle was fought, in the year 879.

Flann son of Conaing had five thousand and Aed Finnliath had one thousand,

Flann son of Conaing, king of all Brega, and Diarmait son of Etarscéle, king of Loch Gabor, fell in this battle.

Very many of the heathens were slaughtered there and Fachtna (the son of Mael Dúin), heir designate of the North, fell in the counterattack of the battle.