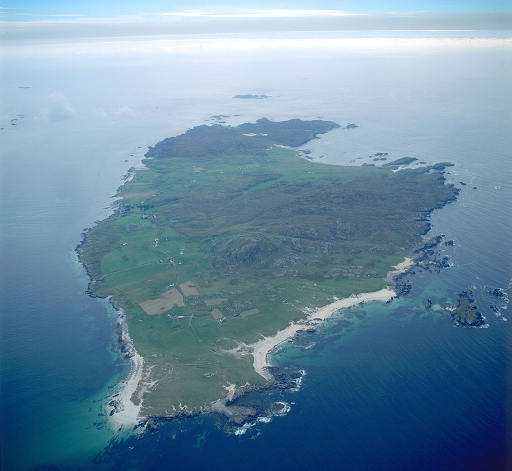 23 September 704 AD: Feast day of St Adhamhnán on this day. He passed away on the little island of Iona [above] off the western Scottish coast. He was one of the greatest scholars of his time and a member of the same family group as the founder of the monastic site, St Columba himself, as both were descended from the powerful Northern Uí Néill dynasty.

He became the 9th Abbot of Iona in 679 AD. He was involved in both religious and political affairs in Scotland, Ireland and in the English kingdom of Northumbria. In the year 687 he secured the release of some 60 important Irish prisoners being held by the Northumbrian King Aldfrith. Ten years later in 697 AD he was the chief instigator and author of Cáin Adomnáin (Law of Adhamhnán) also known as the Lex Innocentium (Law of Innocents) that was promulgated amongst a gathering of Irish, Dal Ríatan and Pictish notables at the Synod of Birr, Co Offaly. This set of laws were designed, among other things, to guarantee the safety and immunity of various types of non-combatants in War.

He is best known though as the biographer of St Columba in the Vita Columba [Life of Columba], a hagiography based on the stories on the Saints' life passed down from those who knew him. This work is one of the most important religious and political sources for Ireland and Scotland that we have that is still extant. Adhamhnán also wrote poetry as well as a work called De Locus Sanctis, which was a study on the Christian Holy Places of Pilgrimage in Palestine.

Adamnán, abbot of Í, rests in the 77th year of his age.