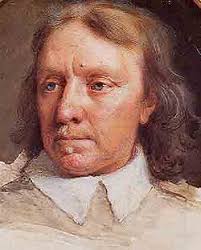 3 September 1658: Oliver Cromwell ‘The Lord Protector’ died on this day. He still remains one of the most hated figures in Irish History even though he spent less than a year of his life in this Country. He was born in 1599 but did not rise to prominence until the outbreak of the English Civil War in 1642 when he raised a troop of cavalry to fight for their Parliament against King Charles I.

Quickly proving his worth in his native area of east Anglia he played a significant role in the parliamentary victories at Marston Moor [1644] and Naseby [1645]. When civil war flared up again he commanded a force which first crushed a Royalist revolt in South Wales and then at the battle of Preston [1648] when he defeated a Scottish-royalist army of invasion. Cromwell consistently attributed his military success to ‘God's Will’ but there is no doubt that he had natural leadership talents that made him the best military Leader that England’s Parliament had - and indeed one of the most able soldiers of that Age.

Following the execution of King Charles in January 1649 an Expedition was assembled to take back Ireland from the Catholics. This was a task that Cromwell did indeed consider ‘Gods Will’ and as its Commander he was determined to see that those who had ‘rebelled’ against the rule of England’s Parliament were punished for what he believed were the huge atrocities and massacres committed against the Protestants of Ireland in the Rising of 1641.

On 15th August 1649 he came ashore at Ringsend near Dublin having left Milford Haven in Wales two days before. He brought with him an army of 4,000 horse and 8,000 foot. He quickly moved north to take the town of Drogheda where there was a strong force of Royalists. On 11 September with the help of his artillery train he breached the town’s walls and stormed the place. A massacre followed in which most of the garrison was put to the sword and it is believed many of the inhabitants too.

After the massacre, Cromwell sought to explain his actions in a letter to William Lenthall, speaker of the Parliament:

…I am persuaded that this is a righteous judgement of God upon these barbarous wretches, who have imbued their hands in so much innocent blood, and it will tend to prevent the effusion of blood for the future, which are satisfactory grounds to such actions, which otherwise cannot but work remourse and regret….

One month later on 11 October his Army was before the walls of the important port of Wexford and while still in negotiations with the garrison his troops gained entry through an agent inside. Another massacre followed and many priests and women were slaughtered.

These actions sent shock waves throughout Ireland and Cromwell’s reputation for ferocity was firmly established.

With Winter now closing in and his Army ravaged by disease and the cold Cromwell curtailed his operations. He too came down sick and he allowed his subordinates to do the running. It was not to be until the following Spring that he was again involved in a major siege - this time at Clonmel.

Oliver ‘Cromwell arrived to take charge of the siege on 27 April 1650 with an additional force of 8,000 infantry, 600 cavalry and twelve field guns. He was anxious to conclude operations in Munster before returning to England and planned to take Clonmel by storm rather than relying upon the lengthier process of starving the garrison into submission. In early May, Cromwell's gunners began bombarding Clonmel's northern wall, but the field guns he had brought with him were not powerful enough to make a breach large enough to allow a massed assault. Cromwell therefore had to wait for heavy siege artillery to be hauled overland to Clonmel. Meanwhile, O'Neill conducted an aggressive defence, mounting frequent raids on the English lines to disrupt work parties constructing the siege works.’

On 9 May the Parliamentarians poured through a breach in the towns walls –and right into a trap. Cromwell had to withdraw with a loss of 2,500 men. The following day General O’Neill led his men out - and Cromwell led his battered men in. Surprisingly this time he kept them on a leash and no massacre followed. But a deeply chastened Cromwell had suffered the biggest defeat of his military career. Less than a month later Cromwell returned to England, which was facing a threat of invasion from Scotland, which had declared for the exiled King Charles II. He never returned.

But Cromwell’s legacy did not end there. In the years that followed his lieutenants and subordinates issued forth from their strongholds across Ireland to wage a vicious campaign of war and slaughter on many of the populace. Tens of thousands of people were shipped off as virtual slaves to the West Indies & many landowners were dispossessed of their ancient holdings. Religious Freedom was denied to the Catholics of Ireland & their civil and political liberties trampled on. To this day his name is reviled amongst the Irish.