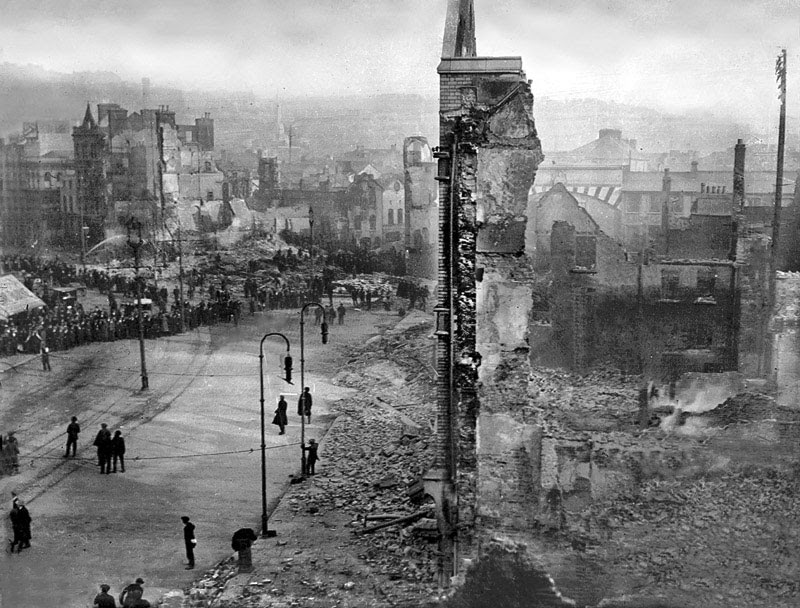 11 December 1920: The burning of Cork on this day. After an IRA attack on a lorry load of RIC Auxiliaries at Dillons Cross in which one of them was killed members of the Crown Forces went on a rampage in Cork City Centre. Buildings were set alight and many were gutted by fire. Two men who were members of the Cork IRA, Con and Jer Delaney were shot dead in their own home. British forces deliberately set fire to several blocks of buildings along the east and south sides of Saint Patrick’s Street during the hours of darkness and the following morning. The City Hall and the Carnegie Library were also completely destroyed by fire. The loss of the stock of the library and of the records in Cork City Hall was a huge blow to future historians.


Florrie O'Donoghue described the scene in Cork on the morning of the 12th:


Many familiar landmarks were gone forever – where whole buildings had collapsed here and there a solitary wall leaned at some crazy angle from its foundation. The streets ran with sooty water, the footpaths were strewn with broken glass and debris, ruins smoked and smoldered and over everything was the all- pervasive smell of burning.

The Chief Secretary for Ireland, Sir Hamar Greenwood, immediately denied that Crown forces were responsible for the conflagration. However subsequent local inquiries carried out by reputable bodies established that members of the Crown Forces were indeed culpable for the widespread destruction. Afterwards, some Auxiliaries took to wearing piece of half-burnt cork in their hats. But their black humour could not disguise the fact that these actions further undermined their already weakening authority and showed the World that Britain could not control her own Forces on the streets of a City that it claimed was part of their Empire.