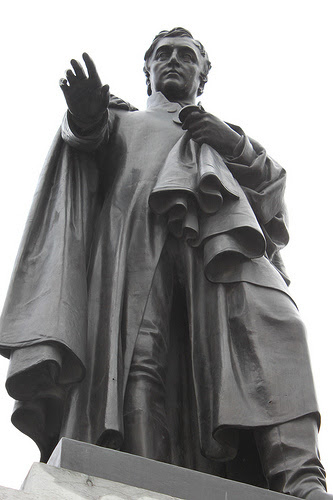 8 December, 1856, Father Matthew, Apostle of Temperance, died at Cobh in County Cork after suffering a stroke on this day. He was born at Thomastown Castle, Co Tipperary in 1790. He was ordained a priest 1814 and spent 24 years in the Diocese of Cork before he began his great Crusade against Drink.

His striking personal appearance is thus described: "A finely-formed, middle-sized person, of exquisite symmetry; the head of admirable contour, and from which a finished model of the antique could be cast; the countenance intelligent, animated, and benevolent; its complexion rather sallow, inclining to paleness; eyes of dark lustre, beaming with internal peace, and rich in concentrated sensibility, rather than speaking or kindling with a super-abundant fire; the line of his mouth harmonizing so completely with his nose and chin, is of peculiar grace; the brow open, pale, broad, and polished, bears upon it the impress not merely of dignified thought, but of nobility itself."
www.libraryireland.com

In 1838 came the crisis of his life and after battling with his own Demons he founded the Cork Total Abstinence Society on 10 April 1838 in his own schoolhouse. He presided, delivered a modest address, and took the pledge himself. Then with the historic words,"Here goes in the Name of God", he entered his signature in a large book lying on the table. From then on night after night, Father Mathew addressed crowded assemblies. In three months he had enrolled 25,000 in Cork alone; in five months the number had increased to 130,000.


The movement now assumed a new phase. Father Mathew decided to go forth and preach his crusade throughout the land. In the following years he gave the Pledge to multitudes throughout Ireland and in Scotland and England too. When the Famine struck he devoted his efforts to the relief of the poor and hungry in Cork and used his influence in England and America to obtain food and money. In the early part of 1849, in response to earnest invitations, he set sail for America. He visited New York, Boston, Washington and many other cities, and secured more than 500,000 disciples. After a stay of two and a half years he returned home in 1851. By then it was estimated he had secured the Pledge from some seven million people. He is buried at St. Joseph's Cemetery, Cork city which he had himself established.