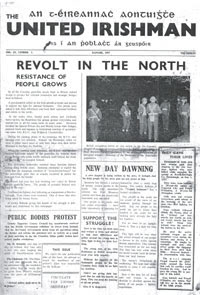 11/12 December 1956: ‘The Border Campaign’ began on this day. The IRA under its Chief of Staff Sean Cronin carried out a series of attacks on Crown Forces personnel and installations in the Border areas of the Six Counties. A BBC relay transmitter was bombed in Derry, a courthouse was burned in Magherafelt, as was a B-Specials post near Newry and a half built Army barracks at Enniskillen was blown up. A raid on Gough barracks in Armagh was beaten off after a brief exchange of fire.


That day the IRA issued the following statement:


Spearheaded by Ireland’s freedom fighters, our people have carried the fight to the enemy…Out of this national liberation struggle a new Ireland will emerge, upright and free. In that new Ireland, we shall build a country fit for all our people to live in. That then is our aim: an independent, united, democratic Irish Republic. For this we shall fight until the invader is driven from our soil and victory is ours.

The campaign after an initial surge of activity was to be marked by a number of intermittent attacks on the British in the North that continued until 1962. But without a certain level of popular support on both sides of the Border it was obvious that further resistance was futile and the IRA called off their campaign and dumped arms.