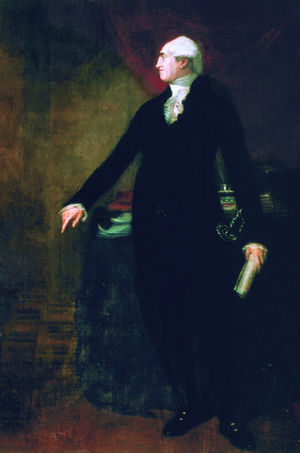 2 December 1791: The death of Henry Flood MP on this day. Flood was one of the great advocates of the legislative independence of Ireland during the latter 18th Century. He was a great orator and a man of considerable intelligence and political acumen. He was however primarily concerned with establishing the political dominance of the Ascendancy Class and the maintenance of the Established Church of Ireland free from the interference of the English Parliament.

He was born in 1732, the illegitimate son of Warden Flood, the Anglo-Irish chief justice of the King's Bench in Ireland. Henry Flood entered the Irish Parliament in 1759 as a placeman of the Ponsonby family (the Earls of Bessborough). His outstanding oratorical powers soon enabled him to create an effective opposition inside the Irish Parliament that agitated for political reforms. They demanded that Irish parliamentary elections should take place every eight years instead of merely at the start of a new British monarch's reign. In 1768 Flood's patriots agitated sufficiently to persuade the Duke of Grafton's government to pass the Octennial Act; in 1769 and 1771 they defeated measures to grant funds for the British administration in Ireland. Their long-range goal was legislative independence.


Although Flood was the first independent Irish statesman, he lost his support in 1775 when he accepted the office of vice treasurer under the British viceroy, Lord Harcourt. Henry Grattan, an even greater orator than Flood, replaced him as leader of the patriots. Grattan described Flood as a man "with a metaphor in his mouth and a bribe in his pocket." In 1779 Flood rejoined his old party, and two years later he was dismissed from his government post. Although Flood had lost his following, he helped Grattan to force North's government to renounce its restrictions on Irish trade in 1779 and grant legislative independence to Ireland in 1782. Flood then decided to challenge Grattan's leadership.


Alleging that Grattan had not gone far enough in his reforms, Flood obtained passage of a measure requiring the English Parliament to renounce all claims to control of Irish legislation. Flood's newly acquired popularity was destroyed upon the defeat of his attempt to reform the Irish Parliament in 1784. From 1783 until his retirement in 1790 he was a member of both the British and the Irish parliaments, though in England he failed to achieve the kind of political successes that he achieved in Ireland. Flood opposed Catholic emancipation and the lifting of the Williamite Penal Laws.

In his will, he bequeathed his estate to fund the study of Irish at Trinity College, Dublin: this was challenged successfully by a cousin. Flood died on 2 December 1791 at Farmley, County Kilkenny. While considered nowadays to be a ‘Patriot’ his brand of patriotism was of a very limited nature of those it wished to encompass.
http://www.historyhome.co.uk/c-eight/people/flood.htm