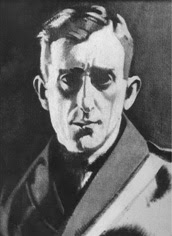 16 December 1971: General Richard Mulcahy died in Dublin on this day. Richard James Mulcahy was born in Waterford and educated by the Christian Brothers both there, and later in Thurles where his father was postmaster. He joined the post office and was employed initially at Bantry, transferring to the engineering department in Wexford and from there to Dublin. A member of the I. R. B. and the Gaelic League he joined the Irish Volunteers in 1913. He fought with Thomas Ashe in Ashbourne during Easter 1916, was imprisoned at Frongoch, and released in the general amnesty in 1917. Chief of Staff of the IRA, he was elected MP for the Clontarf Division in 1918 and served as Minister for Defence in the First Dáil until April 1919. He played an important role as the senior staff officer in the War of Independence ensuring that the IRA was organised and conducted its affairs as a disciplined force answerable to its officers.


He supported the Treaty and served as Minister for National Defence in the Provisional Government and succeeded Michael Collins as Commander in Chief of the Free State Army after his death. He gave the graveside oration at Michael Collins funeral at Glasnevin Cemetery. He exercised primary responsibility for the conduct of the Civil War campaign against anti-Treaty forces. He pressed for harsh measures against the Republican forces including the execution of men taken in arms. However his ability to balance calculated harsh measures against atrocities and unofficial reprisals carried out at local level was problematic to say the least. While his determination and ruthlessness shortened the War it also prolonged the many years of bitterness that followed.


He resigned from the Cabinet during the army crisis of 1924 but re-entered the Cabinet as Minister for Local Government in June 1927. After the resignation of W.T. Cosgrave in June 1944 Mulcahy was elected leader of Fine Gael. Because of his Civil War legacy he stood aside to allow John A. Costello to form the First and Second Inter-Party Governments and served as Minister for Education in both (1948–51, 1954–57) and as Minister for the Gaeltacht (July–October 1956). He resigned from the leadership of Fine Gael in 1959 and from active politics in 1961.