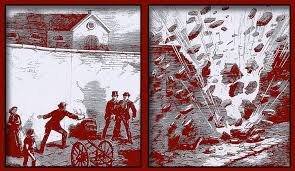 13 December 1867: The Clerkenwell Explosion. In an abortive attempt to free the Fenian Leader Richard O’Sullivan Burke from Clerkenwell Prison in London a huge bomb was placed at the foot of the prison wall. This detonated with such devastating force that it brought down a large chunk of it but without result. Unfortunately the amount of explosives was so great that it blew down a tenement block across the road and killed 12 of its inhabitants while injuring many more.

Richard Burke was at the time a political convict confined in Clerkenwell Prison, London, and the design was formed by Fenian sympathizers in the metropolis to effect his release by making a breach in the outer wall of the prison by means of gunpowder at an hour of the day when he was supposed to be exercising in the yard inside of this wall; so as he might "bolt" directly after an aperture had been effected by the explosion. In pursuance of this plan, a barrel of gunpowder was placed against the wall on the 13th of December, 1867, and at the appointed hour was exploded by means of a fuse. The effect was fearful: one hundred and fifty feet of the wall was blown in, and a dozen tenement houses oh the opposite side of the street were laid in ruins. There were twelve persons killed, and more than one hundred wounded in these houses. The report of the explosion was heard all over the metropolis, and brought crowds to the scene of the disaster. Utter ignorance of the nature and potency of explosives, in the minds of some man or men of the labouring class, who had executed this reckless business, is assigned as the true cause of this calamity.

The Times of London thundered:

Let there be no more clemency for Fenianism, which is a mixture of treason and assassination.


“The London masses, who have shown great sympathy towards Ireland, will be made wild and driven into the arms of a reactionary government. One cannot expect the London proletarians to allow themselves to be blown up in honour of Fenian emissaries.”


As it turned out the object of the rescue, U.S. Civil War veteran Colonel Richard O’Sullivan Burke remained securely inside. He was eventually released by the British in 1872 after feigning insanity and made his way back to the USA where he joined Clan na Gael and continued his efforts on behalf of the Fenians. He lived on until 1922 when he died at the ripe old age of 84!