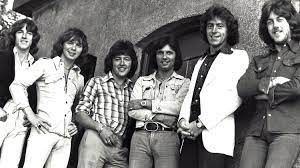 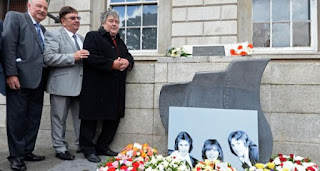 31 July 1975 The Miami ShowBand Massacre on this day: On the morning of Thursday 31 July 1975 people all across Ireland turned on their radios and heard the astonishing and terrible news that members of the most popular Showband here had been shot down in cold blood at Buskill County Down.

The Ulster Volunteer Force (UVF) carried out a gun and bomb attack on the members of the Miami Showband. Three members of the band were killed and one seriously injured during the attack. Two members of the UVF gang were also killed when a bomb they were handling exploded prematurely.

The Miami Showband had been playing at 'The Castle Ballroom' in Banbridge, Count Down. Five members of the band left in their minibus and travelled south on the main dual-carriageway. The minibus was stopped by what appeared to be a Ulster Defence Regiment (UDR) checkpoint at Buskhill, near Newry. However the checkpoint was bogus and was being operated by approximately 10 members of the UVF - at least four of whom were also members of the UDR.

The members of the band were ordered out of the van and told to line up by the side of the road. Two UVF men then planted a bomb into the van. The bomb exploded prematurely killing the two UVF members. At this point the other UVF members opened fire on the band musicians.

Francis (Fran) O'Toole (29), the lead singer with band and famous for his good looks, was shot 22 times in the face while he lay on his back on the ground. Two other band members Anthony Geraghty (23), who was shot four times in the back, and Brian McCoy (33), shot nine times, both died at the scene. Another member of the group (Stephen Travers) was shot with a 'dum-dum' bullet and seriously injured but survived. The two UVF men who died were Harris Boyle (22) and Wesley Somerville (34); both were also members of the UDR.

There was speculation after the event that the UVF had tried to hide the bomb on the minibus with the intention of the bomb exploding after the members of the van had resumed their journey. It would then have been claimed that the members of the band were transporting explosives on behalf of the IRA. In 1976 two members of the UDR were sentenced to prison for their part in the attack. They received life sentences but were later released under the terms of the Good Friday Agreement.

A monument dedicated to the dead Miami Showband members was unveiled at a ceremony at Parnell Square North, Dublin, on 10 December 2007. Survivors Stephen Travers and Des McAlea were both present at the unveiling. The monument, made of limestone, bronze and granite, by County Donegal sculptor Redmond Herrity, is at the site of the old National Ballroom, where the band often played.