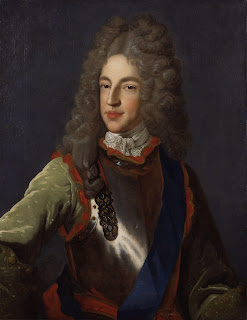 10 June 1688: James Francis Edward Stuart, aka ‘King James III of England and VII of Scotland’ was born on this day. He was born at St James Palace, London. He was the only legitimate son of James II by his wife Mary of Modena. His birth triggered a Constitutional Crises in these islands as he was baptised a Catholic and stood to inherit his fathers’ Realms in due course. Later that year occurred the ‘Glorious Revolution’ and the deposition and flight of James II to France. It was rumoured that the actual infant died at birth and a substitute was surreptitiously brought into the birth chamber inside a Warming Pan. While this is almost certainly a piece of propaganda spread by the enemies of his father such rumours undermined his status in England in particular when he reached maturity. His birth thus triggered a series of actions that led to the ‘War of the Two Kings’ that was fought upon the soil of Ireland between 1689 and 1691.

On the death of James II in 1701 he proclaimed himself King James III. He was recognised by the followers of the Stuart Cause as the legitimate successor to his father’s Kingdoms. He was also acknowledged as such by a number of Continental Powers incl France & Spain. He also had many secret adherents within England, Scotland and Ireland. As a young man he saw action in the War of the Spanish Succession and twice attempted to establish himself upon the Throne. In 1708 he was thwarted in a landing upon the coast of Scotland. His best chance came upon the death of Queen Anne in 1714 when the Crown was vacant and before George of Hanover (a Protestant) could arrive to take it. But delay proved fatal and James’s Scottish supporters only raised the banner of revolt in late 1715. Their attempt, though initially well backed proved a Fiasco. By the time James landed in December support was ebbing away and after a few weeks he was forced to depart for the Continent. He never saw the island of his birth again.

Eventually he settled in Rome under the protection of the Papacy where he took up residence at the Palazzo Muti and held a Jacobite Court there with funds provided by the Vatican, the Spanish Monarchy and his supporters. He thereafter lived a long but frustrating life. He married Princess Maria Klementyna Sobieska of Poland in 1719 and had two sons by her. She however died in 1733 and he never remarried. He lived long enough to see his son ‘Bonnie Prince Charlie’ fail in his attempt to overthrow the Hanoverian Dynasty in 1745/46. He was known in his years of Exile as the ‘Old Pretender’ to his enemies or ‘The King over the Water’ to his friends and admirers in these islands. He died in Rome on 1 January [O.S.] 1766 and is buried in St Peters in Rome.

In following such a record of broken hopes and unrelieved failure, the initial sense of disappointment yields gradually to a more temperate compassion. There is an indefinable pathos in the spectacle of this tragedy- king, parading his solemn travesty of sovereignty before an unromantic and imperturbable audience. When it is remembered that he lived to see no less than five sovereigns on the English throne, all of whom he had been taught to regard as usurpers, it may help towards understanding how deeply the iron must have entered into his soul.