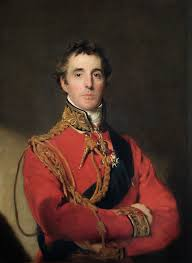 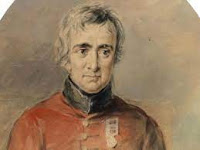 18 June 1815: The Battle of Waterloo on this day. This great battle was fought out some 10 kilometres south of the Belgic city of Brussels, along the Ridge of Mont St Jean and on the fields to the south of it. The French Emperor Napoleon Bonaparte was defeated by the combined armies of the Duke of Wellington [above] of the British & Allied Armies and Marshal Blucher leading the forces of Prussia. It was a battle in which men of many nations participated. Soldiers from England, Scotland, Wales, Ireland, the United Provinces (Holland + Belgium), Hanover, Wurtembourg, Prussia and other minor German states fought the forces of France to decide the fate of Europe.

At least three infantry or cavalry brigades were led by Anglo Irish generals.

Major Dawson Kelly  - led the 73rd foot after all Officers were killed or wounded.

While the British Army had 10 infantry regiments and 4 cavalry ones with ‘Irish’ in their description only three actually saw service in this campaign:

The Inniskillings ‘the Skins’ took some of the heaviest losses of any Regiment on the day.

‘By that evening, the 27th Regiment's casualties were apparently considerable for all to see and an officer of the 95th Rifles later wrote that, 'the twenty-seventh regiment were literally lying dead, in square, a few yards behind us'. When Wellington ordered the general advance around 2000 hours, there were, despite such descriptions, sufficient survivors to enable the Inniskillings to move forward to La Haye Sainte. Perhaps it was there that a captured French General was first reported as saying, 'I have seen Russian, Prussian and French bravery, but anything to equal the stubborn bravery of the regiment with castles I never before witnessed'.

The 27th (Inniskilling) Regiment of Foot's killed and wounded amounted to almost 500 out of a total of 747 - amongst the highest casualties of British regiments. In this number were sixteen out of the nineteen officers and twenty-three of the thirty-four Colour Sergeants and Sergeants, all killed or wounded.’

The British Army who fought that day fielded about 24,000 men drawn from England & Wales, Scotland and Ireland. At that time the Irish (Catholic, Protestant & Dissenter) comprised some 30% of the population of these islands. That ratio was well reflected in the ranks of the military force present at Waterloo with the Irish having a strong presence pretty well across the board in all arms Cavalry, Infantry and Artillery. Outside of the Officer Class most of these were poor men, labourers and weavers in the main who found in the Army a relatively secure measure of employment along with shelter & comradeship.

By all accounts the Irish were good fighters but rightly or wrongly were seen as undisciplined off the battlefield. Many were from Catholic households but the Protestant population was represented as best we can judge in numbers that matched their proportion of their Country’s population. The rank and file were seen as emanating from the ‘scum of the earth’ by Wellington and probably by most of the Officer Class too. In some respects he was right as many were there because they were outcasts and misfits from civil society or rough men who sought a fighting career. But they could fight and fight well - and that's what they were there to do.

When the battle ended that evening some 6,000 men of the British Army laid dead, dying or severely wounded on the battlefield - some 25% of the force engaged. On a per capita basis that would be around 2,000 or so men from Ireland who fell that day - a heavy enough toll. On the other hand the population of the island was some Six Million souls in 1815 so while a severe loss to those that had family in the Military it would not have been seen as a National Calamity. Indeed many might well have wished for a French Victory that day - Daniel O’Connell being one of them.

There are a number of roads and landmarks in Ireland still that celebrate the battle that day. The most imposing being the Wellington Monument in the Phoenix Park in Dublin that commemorates the Duke of Wellington’s Victories. The halfpenny footbridge over the Liffey in the City Centre is officially ‘Wellington’ bridge and in the suburbs south of the city there are the Wellington and Waterloo roads. North of the river Liffey off the North Strand there is a Waterloo Avenue. In Trim Co Meath where his family hailed from there is also a monument to honour him.

But while still a Hero in Britain his legacy at home is less sure given his vehement opposition to Catholic emancipation and his eventual sour acceptance of its political necessity. If Waterloo is remembered at all here its for it marking the end of Napoleon Bonaparte’s career rather than any part that Ireland played in his Downfall.

Next to the formidable Duke the Irishman who is most worthy of mention was Sergeant James Graham [above] 2nd Battalion Coldstream Guards from Clones Co Monaghan. He helped in closing the gates of the Hougoumont Farmhouse which was a vital strategic point on the battlefield, positioned out in front of the right of the allied line. It was attacked throughout the day by thousands of French infantrymen, but held out to the end. The Duke nominated him as 'the bravest of the Brave' and mentioned in him in his Supplementary Dispatches on the Battle:

He assisted Lieutenant-colonel Macdonnell* in closing the gates, which had been left open for the purpose of communication, and which the enemy were in the act of forcing. His brother, a corporal in the regiment, was lying wounded in a barn, which was on fire, and Graham removed him so as to be secure from the fire, and then returned to his duty.

* Coldstream Guards and the senior British Officer at Hougoumont.

Sergeant Graham lived on until 1845 and died in the Royal Hospital Kilmainham Dublin. He is buried in the Old Soldiers plot in the grounds of that Institution.