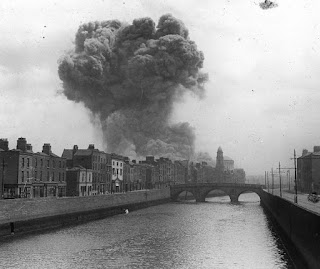 30 June 1922: The siege of the Four Courts building in Dublin came to an end OTD. The attack on the building marked the beginning of the Irish Civil War. It had begun two days earlier when the Army of the Irish Free State opened fire on the Irish Republican Army garrison within who would not lay down their arms. They had been given artillery pieces by the British Army still left in the City under General Sir Nevil Macready. On the 29th Free State troops had stormed the eastern wing of the Four Courts, losing three killed and 14 wounded and taking 33 prisoners. Relief forces in the City Centre found it impossible to reach them. So after two days intensive fire the Officers and men decided that their situation was a forlorn one as many parts of the main structure were aflame & besmoked. They were left sheltering for their lives & without hope that their attackers would desist in their endeavours to drive them out. With the situation hopeless Oscar Traynor who was in overall command of Republican forces in Dublin got a message through to them to call it a day:

As Senior Officer outside I take it that I am entitled to order you to make a move which places me in a better military position. This Order must be carried out without discussion. I take full responsibility.

About 140 men marched out and into captivity though some managed to give their captors the slip incl.  Ernie O’Malley who was to live to fight another day. Three of the republican garrison had died in the siege. The Free State lost seven dead and around seventy wounded.

before they left the building orders were given that all arms were to be given to the officers and destroyed...guns were stripped broken and piles together then doused with parafinn and set alight. ernie O'Malley as acting O/C of the garrison led the surrender. A bugler sounded the ceasefire order...

The Fall of Dublin Liz Gillis

However what happened after the surrender has reverberated down the decades in popular memory perhaps more than the battle itself - the destruction of the priceless records contained within the Public Record Office which contained documents dating back to the Middle Ages that were vital to narrating so much of Ireland’s History from the Anglo-Norman Invasion onwards.

Along the road and the pavement driven by the force of the explosion came hurtling piles of law books, papers, documents which had lain undisturbed for years in the Four Courts. They bounded along, making a noise like a charging army.

In the Legion of the Vanguard J.A.Pinkman

An Irish Life reporter recorded that:

a few minutes later, fragments of legal documents, urged into the sky by the explosion, were rained in several parts of the city...The explosion took place under the offices of the probate and land judges courts, completely demolishing that wing of the building and throwing myriads of forms and documents into the sky.

To this day blame is apportioned by both sides to the other for causing such huge devastation to such important historical records. There is no doubt that the Republicans did store vast quantities of explosives with the building or at least adjacent to it and mines had been laid for the unwary but the most probable immediate cause of the irruption was most likely a fire that started as a result of an artillery shell fired by the besiegers that set alight material that spread to the incendiary material within.

It was a momentous start to a Civil War that was to last until late Spring the following year and laid the foundations to decades of bitterness between the survivors on both sides & the political parties they established in the wake of the War that only really came to an end in recent years.