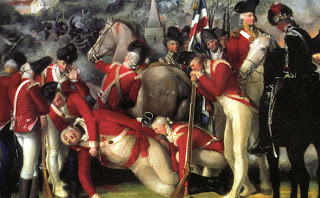 13‭ June 1798: The Battle of Ballynahinch/Baile na hInse, (town of the isle) was fought on this day. This battle occurred in County Down between the insurgents of the United Irishman under ‘General’ Henry Munro [who was actually a linen merchant from Lisburn] and the forces of the Crown under ‬Major-General George Nugent ‭. The town had actually been seized some days previously by local insurgents but on the day before the battle a well-armed force of some 2,000 military under Nugent entered it and set about upending the place. That evening there was a great deal of skirmishing and much of Ballynahinch was ransacked as the soldiers and Yeomanry engaged in drinking and revelry. The insurgents had established themselves on the hills to the south and east of the town and had in all about 5,000 men under arms. However most were armed only with pikes and any attempt to meet the Crown Forces in open battle was bound to be a massacre. The superior firepower along with the discipline and cohesion of the soldiers was bound to tell against the insurgents if the British Army was to march out the next morning in line of battle.

Munro’s officers urged him to launch a night attack upon the town and catch the enemy off guard,‭ as they were audibly not in a coherent state that night anyway to resist a determined assault. But he hesitated to do so as he did not have confidence in his men that they could carry off with any degree of certainty such a risky manoeuvre as a night attack. So the hours of darkness slipped away and with it a substantial number of the men who had gathered under the flag of the United Irishmen. Many of them in turn lacked confidence in Munro’s judgement and his obvious lack of experience. They felt that defeat was all but inevitable if the Crown Forces gained the initiative. It was readily apparent that when Nugent marched his men out the next day that the odds would be stacked against them. Even though the United Irishmen had the numbers the Crown Forces would be able to use their Combined Arms tactics of Infantry, Cavalry and Artillery to devastating effect upon them.

A mixed and motley multitude met the eye.‭ They wore no uniforms, yet they presented a tolerably decent appearance, being dressed no doubt in their Sunday clothes, some better and some worse. The only thing in which they all concurred was the wearing of the green, almost every individual having a knot of ribbon of that colour, sometimes intermixed with yellow in his hat. ‬In their arms there was as great a diversity as in their dress.‭ By far the majority of them had pikes, which were truly formidable instruments in close fight, but of no use in distant warfare ... others wore swords, generally of the least efficient kind, and some had merely pitchforks.

At daylight Munro finally decided to attack and launched his men against the enemy inside the town.‭ Bloody hand to hand fighting ensued and the fortunes of war ebbed and flowed amongst the burning buildings of the place. At one stage it looked like Victory lay within the grasp of the United Irishmen as the Crown Forces fell back. But they eventually rallied and counterattacked and broke the back of the pikemens brave charges upon their positions.

In the meantime Nugent had directed other columns to come round in the rear of the hillside camps of his opponents and turn their positions.‭ ‬A detachment from the garrison in Downpatrick had arrived under Colonel Stapelton and circled the town to attack Montalto, a commanding eminence skirted by a thick wood. This was where Munro had established his HQ some days prior to the battle.

These developments unnerved his men and caught between the obvious superiority now being gained by the military within the town and the imminent closing off of any viable avenue of escape.‭ ‬This led to the collapse of their morale and a precipitate retreat away from Ballynahinch by the survivors of the battle. Munro attempted to rally his men on Ednavady Hill outside the town but all he could muster by that stage was a motley force of about 150 combatants. With the Crown Forces closing in for the kill they decided to make a break for it and scatter, every man for himself. Munro sought refuge nearby and evaded capture for a few days.

‭ ‬But he was taken through betrayal, brought back to Lisburn and tried and executed within a very short period of time. He was hanged almost within view of his own front door and his head was placed upon display in the Market Square. The town of Ballynahinch itself lay in ruins with almost half the houses within it burned during the engagement and its aftermath. This battle to all intents and purposes ended organised resistance in County Down.‭ ‬In the following days and weeks the military spread out across the Countryside, inflicting many atrocities upon those they suspected of being active participants or silent supporters of the Rising.