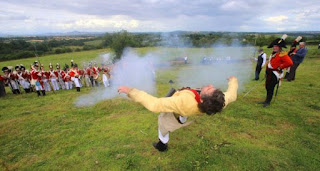 21 June 1798: The Battle of Vinegar Hill/Cath Chnoc Fhíodh na gCaor was fought on this day. The engagement was fought near the town of Enniscorthy in County Wexford. While not the last battle of the Rising of that year it was the most decisive - for after that date there was no real hope that the Insurrection could succeed without Foreign Intervention.

After the outbreak of the Rising in May under the United Irishmen forces were organised to try and break out of County Wexford and spread the Revolt. These attempts though were repulsed and eventually the Insurgents main force fell back on Vinegar Hill for a final stand.Here perhaps 20,000 men women and children had gathered in a huge makeshift camp to escape the depredations of the Military. They were in a blood lust against those who they considered to be ‘rebels’. Massacres and atrocities had been committed by people on both sides but the general consensus is that the Yeomanry and Militia were the worst and the hapless peasants of the Countryside the chief victims.*

A number of columns of the British Army under General Lake advanced upon Enniscorthy from various points on the compass. His intention was to completely surround the town and hill and force a capitulation. Lake divided his force into four columns to accomplish this; three columns, under Generals Dundas, Duff and Needham were to assault Vinegar Hill, while the fourth column, under General Johnson, was to storm Enniscorthy and its bridge. The insurgents had done little or nothing to prepare their defenses even though a number of weeks had elapsed since they occupied the position.

surprised to find that scarcely anything had been done to make formidable against the enemy; that vast fences and ditches that surround it on three sides and which should have been levelled to the ground for at least a cannon shot, or half a mile of distance, were all left untouched. The English forces availing themselves of these defences advanced from field to field, bringing with  them their cannon which they placed to great advantage behind and under cover of the hedges and fences, whilst our men were exposed to a terrible fire from their artillery and small arms without being able to drive them back from their strongholds in those fields.

The battle began at dawn with an artillery bombardment by the British. This had a devastating impact on the masses of people gathered on the hill and it can only be expected that many took any opportunity they had to flee to safety. Sometime after 7 am the Infantry commenced their Advance. As the day wore on the net tightened and despite two charges by the pikemen it was hopeless against such a well armed force. Eventually those that could made a break for it as General Needham was unable to close in on his assigned position in time and a gap was open to which to escape. Through it flowed a mixture of fighters and peasants who had the incentive to get out while the going was good.

But many others were either too tired, shocked or plain terrified to risk it and remained to await their fate. It was not to be a good one. When the hill fell many were put to the sword or shot out of hand. Recent archaeological scanning of the site indicates large pits on the north side of the hill that are believed to be mass graves of those who were captured on that day. Though the graves have not yet been excavated perhaps the remains of 1,000 to 2,000 unfortunates are believed to be buried under the soil of Vinegar Hill.

Thomas Cloney [an envoy from Wexford]  came within a mile of Enniscorthy in the aftermath of the Battle and saw:

The dead and dying were scattered promiscuously in the fields, in dykes, on the roads, or wherever chance had directed their last steps. ... In one place we beheld some men with arms and some with legs off, and others cruelly mutilated in various ways; horses with their necks broken, and their cars with women and children under them, either dead or dying in the road and ditches, where in their precipitate flight they had been upset.

In the town of Enniscorthy there had also been fierce fighting and much of the town burnt,

the house which had been used as an hospital by the insurgents, and which was set on fire with all the patients in it, continued burning until next morning, when I saw a part of a corpse still hissing in the embers.

* The accounts you see of the numbers of enemy destroyed  in every action are, I conclude greatly exaggerated. From my own knowledge of military affairs I am sure a very small proportion of them only could be killed in battle and I am much afraid that any man in a brown coat who is found within several miles of the field of action, is butchered without discrimination.

Marquis Cornwallis to the Duke of Portland 28 June 1798.

Quotes from Charles Dixon: The Wexford Rising in 1798: Its causes and its course.