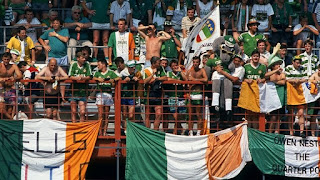 25 June 1990: Ireland beat Rumania 5-4 in a penalty shoot out in Genoa Italy to reach the quarter finals of the World Cup for the first time ever on this day. Thousands of Irish fans [above] travelled to Italy to watch the Irish Team progress through the competition as back home the Irish Nation held its breath as the final minutes of the game were played out live on TV. The match had ended in a scoreless draw and the outcome was to be decided in a penalty shoot out. It went to 4-4 each as Ireland’s goalie Packie Bonner did sterling work in taking the saves. Then David O’Leary stepped forward to take the final kick and delivered the killer blow - We were through!

The whole country erupted with jubilation and anyone who was old enough at the time to witness it can still recall to this day where they were when they saw it happen in what is still probably Ireland’s greatest shared sporting moment on the World stage.

In Dublin Castle, then Taoiseach Charles Haughey had suspended a press conference marking the end of Ireland’s presidency of the European Union, saying, "There’s something we should be watching on TV that might be a little bit interesting, for the Irish amongst us, at any rate."

The team was led by the legendry English soccer player Jack Charlton who was a no nonsense Yorkshireman with a shrewd eye for players who could meet the grade. The euphoria of getting to the World Cup was palpable across the Nation as a feeling of National pride swept the Country. In the event we then went down to hosts Italy in Rome by one goal. But nonetheless the team arrived back home as heroes welcome.

In its' first World Cup finals the Republic of Ireland had bowed out at the quarterfinals stage losing by a single goal to the hosts, Italy, at the Olympic Stadium in Rome. It had been a very strange campaign in that Ireland had not won any of their matches, had only scored two goals, and had played in some really poor matches in terms of quality of play. Notwithstanding this the Irish had over-achieved which was fully appreciated by the Irish supporters. The green army stayed on in the Olympic Stadium long after the final whistle to laud Jack Charlton and his gallant squad.