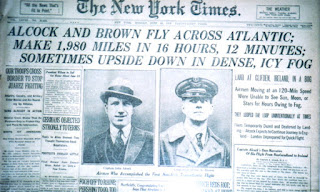 15 June 1919: The British aviators John Alcock and Arthur Whitten Brown made the first non-stop heavier than air flight across the Atlantic on this day. They flew a modified Vickers Vimy bomber plane from St. John’s Newfoundland to Clifden, Co Galway thus winning the Daily Mail prize of £10,000. The lucrative prize had been up for grabs since 1913 when the Daily Mail first proposed the idea. Their offer ran as follows:

"the aviator who shall first cross the Atlantic in an aeroplane in flight from any point in the United States of America, Canada or Newfoundland and land at any point in Great Britain or Ireland" in 72 continuous hours".

Both men had served as Aviators in the Great War and both had been shot down and captured, Alcock by the Turks and Brown by the Germans. During his captivity Alcock determined that if he survived the War he would go for it. As Fortune had it both men were at a loose end after their release and return home. Alcock approached Vickers with the idea of backing the attempt and teamed up with Brown as his co pilot for the crossing.

Several teams had entered the competition and when Alcock and Brown arrived in St Johns Newfoundland the Handley Page aircraft team were in the final stages of testing their machine for the flight but their leader, Admiral Mark Kerr, was determined not to take off until the plane was in perfect condition. The Vickers team quickly assembled their plane and at around 1:45 p.m. on 14 June, whilst the Handley Page team were conducting yet another test, the Vickers plane took off from Lester's Field.

The flight nearly ended in disaster several times owing to engine trouble, fog, snow and ice. It was only saved by Brown's continual climbing out on the wings to remove ice from the engine air intakes and by Alcock's excellent piloting despite extremely poor visibility at times and even snow filling the open cockpit. The aircraft was badly damaged upon arrival due to the attempt to land in what appeared from the air to be a suitable green field but which turned out to be the bog on Derrygimlagh Moor, near Clifden Co Galway,  but neither of the airmen was hurt.

The news of the adventure spread like wildfire and the two men were received as heroes in London. For their accomplishment, they were presented with Lord Northcliffe's Daily Mail prize of £10,000 by Winston Churchill, who was then Britain's Secretary of State. A few days later, both men were knighted at Buckingham Palace by King George V, for recognition of their pioneering achievement.

Alcock was tragically killed some months later in December 1919 while flying to the Paris Air Show. Brown lived on until 1948.