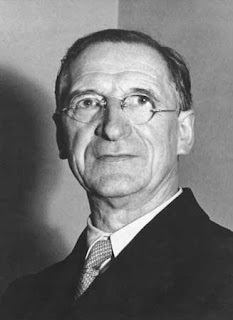 17‭ ‬June 1959: Éamon de Valera was elected President of Ireland on this day. The contest for the highest Office in the Republic was between him and General Sean Mc Eoin from the Fine Gael Party, who had previously ran for the Office in 1945 and had been defeated. He like Dev had been active in the War of Independence but they had taken opposite sides in the Civil War of 1922 -23. The number of people eligible to vote was 1,678,450, of which 979,628 chose to exercise their Franchise. This represented a turnout of 58.4 %. Of the total numbers of votes cast 538,003 voted in favour of De Valera and 417,536 voted for Mc Eoin.

‘De Valera won a majority of the vote in every constituency bar the northern Dublin city constituencies, Longford-Westmeath, which Mac Eoin had represented for over ten years, and Cork West, a strong Fine Gael area. As in the previous election, Mac Eoin's best results were in the Longford and surrounding areas, with strong results also where de Valera didn't win majorities in Dublin. De Valera's vote was strongest in Clare, Galway and Donegal - his share reaching 69% in parts of the latter two counties.'

On the same day was also held a Referendum to abolish Proportional Representation‭ - but here the tide of public opinion swung against Dev and it went down to defeat. ‬The following summary of the principal proposals in the Third Amendment of the Constitution Bill,‭ 1958, was circulated for the information of voters:

At present,‭ members of Dáil Éireann are elected on a system of proportional representation for constituencies returning at least three members, each voter having a single transferable vote.

It is proposed in the Bill to abolish the system of proportional representation and to adopt,‭ instead, a system of single-member constituencies, ‬each voter having a single non- transferable vote. It is also proposed in the Bill to set up a Commission for the determination and revision of the constituencies, instead of having this done by the Oireachtas, as at present.

Eamon De Valera thus became the third President of Ireland after Douglas Hyde and Sean T. O’Kelly. He was again elected in 1966 and retired from the post and thus active politics in 1973. He died in 1975.