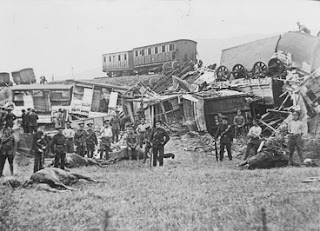 The regiment on board - 10th Royal Hussars (Prince of Wales's Own) - had acted as the mounted escort for King George V when he had opened the Northern Parliament two days previously. They were returning from Belfast to the Curragh Camp Co Kildare via Dublin. Other trains carrying regimental personnel had been allowed to pass but this one was carrying the HQ Staff of the Regiment under Capt. Lord W Montague Douglas Scott MC. Three special trains had been laid on and it was the third that was attacked. On board there were 113 men, 4 officers and 104 horses.

Word reached Republican circles that three trains carrying troops were leaving Belfast bound for Dublin. The local IRA under Frank Aiken decided to launch an attack on at least one of them and inflict as many casualties as they could.

By March 1921 the physically imposing Aiken, every inch the IRA ‘big man’, had risen to commandant of the IRA’s 4th Northern Division. A few months later, Aiken’s reputation was bolstered by his responsibility for a ‘spectacular’: the derailment of the train carrying the cavalry regiment that had escorted King George V at the opening of the Northern Ireland parliament.

Along this stretch of the line the railway traces through the Gap of the North at the south-east end of the Ring of Gullion. South-bound, the section of the line here is a steep climb and goods trains rarely exceeded 15 mph even with a good head of steam. It was thus a perfect place to lay an ambush as the track here was on an embankment with a 30 ft drop.

At approximately 10 AM that morning the guard car was hit as the mine exploded with devastating effect. It was blown asunder and two soldiers & one civilian guard were killed on the spot. Considerable carnage resulted as some 15 coaches belonging to the Great Northern Railway Company were derailed and many tumbled down the embankment causing devastating injuries to men and horses. In the aftermath numerous animals had to be finished off as they were beyond recovery. Another soldier died later of his wounds. In the aftermath men from the 10th Hussars swept along the tracks rounding up hapless farm labourers, shooting dead one man who tried to make a run for it.

This attack was felt more keenly than many others at the time as the men and horses who were killed & injured were with the King-Emperor George V only two days before to escort him through the streets of Belfast and it was seen as an outrage on his status as head of the United Kingdom of Great Britain & Ireland had suffered terribly as a result. It underscored in a very bloody manner that many of his subjects here had no time for him as their Sovereign & wanted him and his Army gone from Ireland as quickly as possible.